Wake Forest University’s Slavery, Race and Memory Project has published a collection of essays that examine the institution of slavery and its ties to the University. 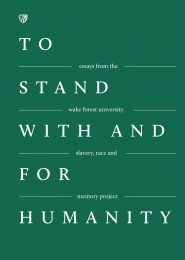 “To Stand With And For Humanity: Essays from the Wake Forest University Slavery, Race and Memory Project” contains essays written by Wake Forest faculty and administrators. It also includes President Nathan O. Hatch’s apology for the institution’s participation in and benefit from slavery and remarks from Dean of Divinity School Jonathan L. Walton.

Also included in the collection are the names of some of the enslaved African Americans who helped to build, maintain and were sold to benefit the original campus in the town of Wake Forest, and a photo depicting an abandoned cemetery where many of the members and descendants of the enslaved community are buried.

The publication broadens the dialogue about the University’s ties to slavery and highlights work of the Slavery, Race and Memory Project Steering Committee, co-chaired by Kami Chavis, associate provost of academic initiatives, and Tim Pyatt, dean of the Z. Smith Reynolds Library.

In 2016, Wake Forest began taking a deep dive into its history, and in 2017 it joined Universities Studying Slavery (USS), a consortium of colleges and universities that are examining the role slavery played on their campuses. The Slavery, Race and Memory Project came out of that work.

“The goal of the Slavery, Race and Memory Project is to bring awareness to slavery in the United States and to explore the University’s role in slavery.” Kami Chavis, associate provost of academic initiatives

“The essays in our publication help to frame and augment a history that has been ignored. By acknowledging this important chapter and reckoning with it, the University can better understand the implications this history has on the Institution today,” said Chavis.

The collection begins with a foreword by Corey D.B. Walker, who edited the publication and who joins the faculty next month as the Wake Forest Professor of the Humanities and inaugural chair of the African American Studies program.

Walker begins by quoting from W.E.B. Du Bois’ 1896 classic, “The Suppression of the African Slave-Trade to the United States of America 1638-1870,” written while Du Bois was a Rogers Memorial Fellow at Harvard University.

“The Slavery, Race and Memory Project at Wake Forest University moves within the wake of Du Bois,” Walker writes. “That is, the Project and the University confront the question, “What are the costs of compromise?”

Walker proffers that the Slavery, Race and Memory Project “possesses the potential to awaken the critical consciousness of the University in fulfilling its ethical responsibility.”

The first essay in the collection is titled “Beyond Nostalgia: Towards an Inclusive Pro Humanitate” and is written by Anthony S. Parent, Jr., professor of history and American ethnic studies. Pro Humanitate, For Humanity, is the University’s motto. 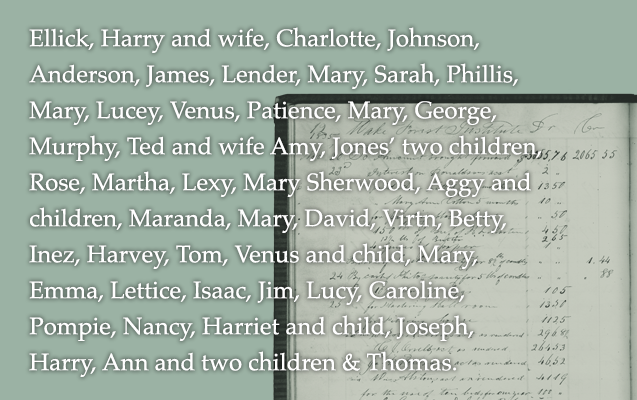 A college account book entry from 1835 showing payments for rented enslaved workers is overlaid with the known names of enslaved people hired by or bequeathed to the school.

Bill Leonard, founding dean of the School of Divinity and professor of divinity emeritus, adds an essay exploring race, religion and slavery at the University titled “Defending the Indefensible: Wake Forest, Baptists and the Bible.”

One of the publication’s most poignant essays is authored by School of Divinity Professor Derek Hicks, director of the newly established Center for Research, Engagement and Collaboration in African American Life. Hicks’ essay is inspired by a visit to the original Wake Forest campus, when he took 21 students in his African American Religious Experience class to a cemetery with ties to a chapel where enslaved people who helped build the original campus once worshipped.

Hicks describes being greeted by a “no trespassing” sign as the class approaches a nondescript group of trees, with no other signs signaling “the existence of the cemetery or detailing the sacredness of the space.” He writes that tombstones in the cemetery were beautifully hand-carved, some with names and dates and others with only simple designs.

“I was struck by how cold it was under the canopy of trees,” Hicks writes. “The wind was swirling and singing. Yet despite the cold and wind, heat seemed to rise up from the ground and warm my feet. It was as though the buried ancestors felt my presence and knew I longed to commune with them. They welcomed me by warming my every step.”

Also in the publication are “The Waits, Women and Slavery,” written by Mary Tribble, senior adviser for engagement strategies in the Office of Alumni Engagement, “Examining Our Past, Enriching Our Future: The Slavery, Race and Memory Project at Wake Forest” by Chavis and Pyatt and “Lest We Forget,” Walton’s Founders’ Day remarks.

The piece co-authored by Chavis and Pyatt gives an overview of the The Slavery, Race and Memory Project, which brings nationally recognized academics to Wake Forest to discuss their research and hold public conversations examining slavery and its implications. Walker was the inaugural Slavery, Race and Memory Project lecture series speaker last fall. A spring lecture on racial health disparities was canceled because of the COVID-19 pandemic.

Pyatt said for the University to address modern racial injustices, it must first acknowledge and recognize its past — work that’s being done by the Slavery, Race and Memory Project. 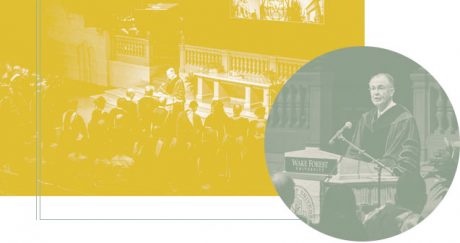 “It includes President Hatch’s apology for the University’s full participation in the economy of slavery, the ongoing work to identify and recognize the people who were enslaved and our efforts to engage with this knowledge to enhance our academic experience and University traditions,” Pyatt said. “By doing this important work, Wake Forest University becomes a more welcoming and inclusive institution that celebrates all humanity.”

The release of “To Stand With And For Humanity: Essays from the Wake Forest University Slavery, Race and Memory Project,” follows the June 9 issuance of the report by the President’s Commission on Race, Equity and Community that was sent campus wide and contains 20 recommendations ranging from recruiting students, faculty and staff of color to developing more inclusive admission practices to supporting economic development in the city of Winston-Salem.

Hatch established the Commission in the summer of 2019 as part of a larger institutional effort to illuminate the University’s history, address the present and reaffirm its commitments for the future. The importance of both documents is underscored by the urgency of the moment as nationwide protests are being held to protest racism and police brutality against people of color.

For interviews with Chavis, Pyatt or Walker, please contact media@nullwfu.edu.