Clinical Sciences Building To Be Named For Janeway 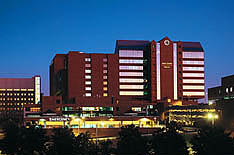 The signature building of the Bowman Gray/Baptist Hospital Medical Center in Winston-Salem will be named for Dr. Richard Janeway, who has led Wake Forest University’s Bowman Gray School of Medicine for almost three decades.

The honor is the latest bestowed on Janeway, who steps down July 1 as head of Wake Forest’s medical school to become a professor with the university’s joint M.D./M.B.A. program.

In 26 years, Janeway has built The Medical Center into a health-care facility consistently ranked by U.S. News & World Report among the nation’s top 50 hospitals in cancer, cardiology and geriatrics in the magazine’s annual guide to America’s Best Hospitals.

One of every six applicants to medical school in the United States applies to Bowman Gray, and the medical school ranks in the top third of schools in National Institutes of Health funding because of its research excellence in arteriosclerosis, stroke, ultrasound, cancer, aging, hypertension and nutrition.

Former chairman of the Association of American Medical Colleges, Janeway has positioned The Medical Center to meet the demands of managed care by forming such affiliates as Aegis Family Health Centers, a network of primary care practices, and QualChoice, the health maintenance organization jointly owned by N.C. Baptist Hospitals Inc. and Wake Forest. His leadership was also critical to the establishment of the M.D./M.B.A. degree program by Bowman Gray and the Babcock Graduate School of Management in 1992.

The $190 million Equation for Progress building program guided by Janeway has provided the physical facilities allowing The Medical Center to adjust to the changing health-care marketplace. The Clinical Sciences Building that will soon bear Janeway’s name is one of the buildings built under the program.

Opened in 1991, the 308,000-square-foot structure became the state’s largest medical office building ñ consolidating most of the outpatient clinical offices and a new Outpatient Surgical Center under one roof for patients’ convenience.

The Clinical Sciences Building becomes the third Medical Center structure named after a former dean. Meads Hall is named after Dr. Manson Meads, and Carpenter Library is named after Bowman Gray’s first dean, Coy Carpenter, who relocated the medical school to Winston-Salem from Wake Forest, N.C., and affiliated it with N.C. Baptist Hospital in 1941.