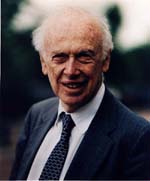 James D. Watson, a Nobel Prize-winning scientist and pioneer of DNA research, will kick off Wake Forest University’s yearlong celebration of “Science and Technology: The Next Millennium” on Sept. 16.

Watson will speak at the university’s Opening Convocation at 11 a.m. in Wait Chapel. The public is invited to the free event.

Regarded as one of the greatest scientists of the 20th century, Watson discovered that DNA has the shape of a double helix, a twisting ladder of nucleotides that “unzips” during cell division. For that research, Watson and fellow researchers Francis Crick and Maurice Wilkins were awarded a Nobel Prize in 1962.

More recently, Watson has been a central figure in the Human Genome Project, an international project that aims to crack the human genetic code and open up the possibility of gene-based therapies for diseases and conditions ranging from breast cancer to depression.

Watson’s Opening Convocation address is among a series of science and technology events planned at Wake Forest. Other events during the year will address topics such as cloning, computer security issues and the state of the environment. The majority of the events are free and open to the public.

Each year, a series of events is developed around a common theme as part of Wake Forest’s Undergraduate Plan, an initiative to enhance undergraduate education. “Science and Technology: The Next Millennium” is the fourth theme year. Previously, the university celebrated the Year of Globalization and Diversity (1998-99), the Year of Religion in American Life (1997-98), and the Year of the Arts (1996-97).

Information about the year’s events is posted on the university’s Web site at www.wfu.edu. Event information is also available by calling 336-758-5788.