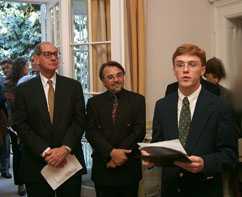 Flow House, a 19th century villa in Vienna, was officially dedicated as Wake Forest University’s newest international residential study center on Sunday, Oct. 3. The house was a gift from Winston-Salem businessman and Wake Forest trustee Victor I. Flow Jr. and his wife, Roddy.

Several Wake Forest trustees, including Flow, traveled to Vienna for the dedication.

Built in the 1890s, the 7,200-square-foot home has served as the private residence of American embassy officials. The current U.S. Ambassador to Austria, Kathryn Walt Hall, attended the event.

The first group of Wake Forest students to live in the stately, three-level home began their studies Aug. 25. The 14 students are learning the German language, while also studying medieval literature, art, music, architecture and theater. A Wake Forest faculty member teaches two courses and two are taught by Viennese professors.

“Vienna has a lot to offer,” says Larry West, Wake Forest professor of German and faculty director in Vienna. “in terms of its long, colorful, historical tradition, its rich musical and artistic heritage and its critical location as a bridge between western and eastern Europe.”

West plans to lead the group to Prague as they study Franz Kafka and will lead excursions to the historic homelands of Goethe and Martin Luther. Students also will visit the former Nazi concentration camp of Buchenwald and go to Oberammergau, home of the world-famous Passion Play, where they will tour the theater and talk with performers.

“The ‘Art and Architecture’ class we are taking is fascinating,” says Emily Kite, a junior participating in the program. “We have already seen ancient Roman ruins, frescoes from the Middle Ages, and a beautiful Gothic church.”

Wake Forest’s other residential study centers are London’s Worrell House and Venice’s Casa Artom, where approximately 1,700 students have studied since the houses opened in the 1970s. The new program in Vienna helps meet the growing demand for international study by Wake Forest students. Currently, one out of every three Wake Forest students studies abroad while enrolled at Wake Forest.