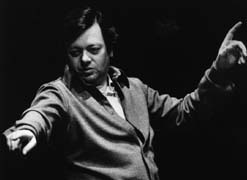 The Vienna Chamber Orchestra with conductor and piano soloist Phillipe Entremont will open the Secrest Artists Series on Oct. 13 as Wake Forest celebrates the opening of its new residential study center in Vienna.

The concert begins at 8 p.m. in Wait Chapel. A pre-concert lecture by David Levy, professor and chair of the music department, will begin at 7:10 p.m. in the Balcony Room of Wait Chapel.

The concert will feature Brahms String Quintet No. 2 in G Major arranged for string orchestra by Entremont. Mozart’s Piano Concerto No. 12 in A Major and Eine kleine Nachtmusik are also featured on the program. The Vienna Chamber Orchestra, recognized as one of the premier interpreters of the chamber ensemble repertoire, recently completed its 50th season.

A reviewer from the Washington Post wrote, “Öit is refreshing to hear an ensemble like the Vienna Chamber Orchestra that cultivates gutsy sonorities and sensual warmthÖConductor Philippe Entremont has shaped an ensemble that is also capable of real delicacy,” while the Palm Beach (Fla.) Post described Entremont as “a stylish, dignified man who brings to the podium and the keyboard an unusual grace and charm.”

Known around the world for his flair and exceptional talent both at the keyboard and on the podium, Entremont has won acclaim on five continents. He has directed the Vienna Chamber Orchestra since 1976. The orchestra has performed throughout Europe and North America and has made several tours of Japan.

Wake Forest’s third residential study center in Europe opened this fall to students and will be dedicated on Oct. 3. The house in Vienna is named in honor of Wake Forest trustee Victor I. Flow Jr. and his wife.

Tickets for the concert are $18 for adults, $13 for students and senior citizens. They are available through the University Theater box office at 336-758-5295. The box office is open weekdays from noon-5:30 p.m.