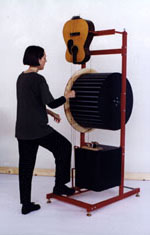 “Fusion: Art and Science,” an exhibition of seven artists who use science in the creation of their work, will open Oct. 8 and run through Dec. 10 at the Wake Forest University Fine Arts Gallery.

Curated by Gallery Director Victor Faccinto and Wake Forest Professor of Biology William Conner, “Fusion: Art and Science” is part of “Science and Technology: The Next Millenium,” a yearlong series of university events focusing on science and technology topics including cloning, computer security issues and the state of the environment.

John Pakosta and Jeff Wyckoff, who both have science backgrounds, “use the tools and methods of science as metaphor for examining the importance of image, meaning, context and the line between reflecting upon and doing science,” said Peter Richards in the introduction to the show’s catalog. Richards is the director of the Tryon Center for Visual Art in Charlotte.

Pakosta will present a slide lecture at 3 p.m. Oct. 6.

Norman Tuck’s “Oscylinder Scope” is an interactive artwork that explores the nature of sound by directly translating the vibration of musical strings into visible waves. His other installation, “Alchemy,” incorporates seawater, copper and a magnet.

“The look of the corroded elements, the presence of water drawn directly from the sea, and of course, the magical movement of the pendulum without an external energy source, combine to speak of alchemy, an art that led to science,” says Tuck of his piece. Tuck was the gallery director at Wake Forest from 1982-83 and taught sculpture at the university from 1987-88.

Alyce Simon of New Mexico uses a particle accelerator to create patterns in blocks of acrylic. Her “atomic energy sculpture” was exhibited at the Smithsonian Institution in 1969.

“Ecology,” a 3-D motion picture installation by Michael Rudnick, features lights flashed on a revolving wire structure. Rudnick is currently an artist in residence at the Exploratorium in San Francisco.

Ned Kahn is known for works that harness nature’s forces. In “Intrusion,” Kahn captures the geological processes that take place within the earth’s outer layers. Three of his sculptures are on permanent display at the N.C. Museum of Life and Sciences in Durham.

The show also includes several prints by M.C. Escher, on loan from Winston-Salem’s Dr. Stephen R. Turner. Much of Escher’s work explores themes common to mathematics and the physical sciences. In the catalog, Wake Forest Associate Professor of Psychology Terry Blumenthal, explains how he uses Escher’s print, “Regular Division of the Plane V” in psychophysiological research.

The upstairs gallery show features 85 drawings by Russian-born artist Oleg Vassiliev. In the exhibit, “On Black Paper, 1994-1997,” Vassiliev seeks to depict in graphic form the process by which memories become assimilated into the mind’s consciousness.

Born in Moscow in 1931, he was one of the leading figures in the Russian “unofficial” art movement, a group of artists who did not conform to the state-mandated “socialist realist” style. Following the collapse of the Soviet Union, the group fragmented and many of the artists left Russia. Vassiliev immigrated to New York in 1990.

“On Black Paper” runs through Nov. 14. Vassiliev and the curator of the exhibit, Wake Forest alumnus Neil Rector, will attend the opening reception Oct. 8.