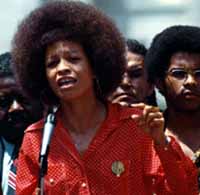 Angela Davis, who gained national attention as a political activist in the 1960s, will speak at Wake Forest University on March 1.

In 1970, Davis was placed on the FBI’s Most Wanted List and imprisoned for a year and a half before being acquitted of murder, conspiracy and kidnapping charges.

In the decades since, Davis has spoken out against racism and classism in the justice system. Currently a professor at the University of California, she has authored the books, “Women, Race and Class” and “Black Feminism.”

Davis published essays in a 1971 collection titled, “If They Come in the Morning: Voices of Resistance,” in which she offers a Marxist analysis of racial oppression in America. She became a member of the Communist Party in 1968. She ran unsuccessfully as the Communist party’s vice presidential candidate in 1980 and helped organize the National Alliance Against Racist and Political Repression.

She also worked with the Student Nonviolent Coordinating Committee and the Black Panthers.

Born in 1944 in Birmingham, Ala., Davis attended Brandeis University and the University of California at San Diego.

The event is sponsored by Wake Forest’s Office of Multicultural Affairs, Black Student Association and the Student Union. For information, call 758-4869.