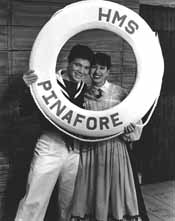 “H.M.S. Pinafore,” a comic opera by Gilbert and Sullivan, will open March 31 at Wake Forest University.

Performance dates are March 31 and April 1-8 at 8 p.m. in the MainStage Theater of Scales Fine Arts Center. A matinee performance will be held April 9 at 2 p.m.

Set on the upper deck of the Pinafore, the story is about people of different social standings who fall in love. The central couple consists of Josephine (Natalie Cordone, junior), the daughter of the Pinafore’s captain (Jonathan Horvath, freshman), and Ralph Rackstraw (Matt Mundy, senior), a member of the crew.

Josephine must conceal her love for Ralph because she is promised in marriage to Sir Joseph Porter (Aaron Bokros, sophomore), first lord of the admiralty. Their difference in social class is a major obstacle that must be overcome in order for Josephine and Ralph to marry.

Other obstacles are provided by the ill wishes of Dick Deadeye (Bill Diggle, senior), a crewmember whose nasty temperament is partly the result of his unfortunate name.

James Dodding, visiting professor of theater, will direct the show.

Since 1979, Dodding has spent spring semesters directing plays and teaching at Wake Forest. He has taught at the London Institute of Education and done broadcasting work with the BBC.

Assistant Professor of Theater Mary Wayne-Thomas designed the set, with costumes designed by Patricia Mueller and lighting designed by Jonathan Christman, lecturer and production manager for the university theater.

William S. Gilbert and Authur S. Sullivan collaborated as writers during the Victorian period in England. Of the 14 operettas the pair produced together, “Pinafore” is considered to be one of their most popular operas and their first huge hit. “Pinafore” was known for its sharp commentaries on the prejudices and affectations of Victorian England’s upper classes.

Tickets are $12 for adults, $8 for students, and may be purchased at the University Box Office or by calling 336-758-5295. The box office is open weekdays, from noon-5:30 p.m. Information is also available from the theater department Web site at www.wfu.edu/Academic-departments/Theatre/.