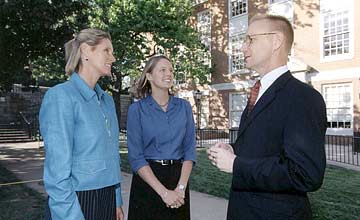 The F.M. Kirby Foundation has announced it will give Wake Forest University $5 million for the construction of a new wing to the Wayne Calloway School of Business and Accountancy.

The gift will help fund the construction of a 50,000-square-foot addition to Calloway Hall, where the school is housed.

“We are extremely grateful to the Kirby Foundation for helping this addition become a reality,” said Jack Wilkerson Jr., dean of the Calloway School.

The total cost for the addition is approximately $14 million. The university has already raised more than $1 million toward construction costs. A start date for construction will be determined once design plans are finalized.

“The addition will provide both the quantity and quality of space the school needs,” said Wilkerson.

The Calloway School and the university’s math and computer science department share the same building. A number of Calloway School faculty members teach classes and have offices in other buildings because of space constraints.

The addition will be designed to offer an enhanced learning and teaching environment by providing more space for group work and the opportunity for more interaction among Calloway School students and faculty.

“It’s important that our curriculum prepare our students for, and be reflective of, the real-world business environment they will be entering when they graduate. The internal design of this addition will help us accomplish this curriculum objective,” said Wilkerson.

The donation from the F.M. Kirby Foundation, based in Morristown, N.J., is an early gift toward the university’s capital campaign, which will publicly kick off in April 2001.

“The Kirby Foundation is delighted to support the Wake Forest capital campaign through a gift to the Calloway School,” said Alice Kirby Horton, a director of the foundation and a Wake Forest trustee from Hillsborough.

“There are three Kirby grandchildren who have attended or are at Wake Forest and two of the three have graduated from the Calloway School,” she added. “So, we feel a definite commitment to the quality education that the students get there and the wonderful experience that our whole family has had at Wake Forest.”

This is the second gift the foundation has made to the Calloway School. In 1996, the foundation gave $1.25 million to endow the F.M. Kirby Chair of Business Excellence, which is held by Professor Roger L. Jenkins.

The Calloway School, founded 50 years ago, currently ranks among the top ten percent of accredited undergraduate business programs in the country, according to U.S. News & World Report.

Nearly 400 students are currently enrolled in the school, which offers four-year degrees in business, analytical finance, mathematical business and management information systems and a five-year degree program to earn a bachelor’s and master’s in accountancy.

Students in the accounting program have the highest passing rate in the country for their performance on the CPA exam. The program ranks among the top 20 in the nation.

The Calloway School also offers a master’s in accountancy degree for individuals who have already earned an undergraduate degree.

The school’s other programs include an overseas tour of major European corporations and accounting firms; summer management courses for non-business majors; and a risk management fellows program.