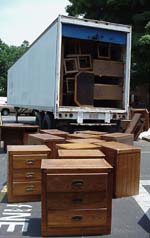 “We knew the initial donation of furniture was significant, but giving the additional sets of furniture will help more families in more communities get back on their feet more quickly,” said Michael Logan, a purchasing officer at Wake Forest who got the ball rolling for donation of the furniture more than two months ago.

Wake Forest employees, along with volunteers from area churches, businesses and the North Carolina Baptist Men of the Baptist State Convention, began moving the furniture — bunk beds, wall mirrors, dressers and student desks with bookcase hutches — on May 16 into tractor-trailers for transport to a distribution warehouse in Grifton, south of Greenville.

The furniture was scheduled to be replaced this summer. Several area businesses donated the trucks and trailers to move the furniture to the Baptist State Convention warehouse.

“The donation from Wake Forest is the largest single donation of furniture we have received to help the people devastated by Hurricane Floyd,” said Gaylon Moss, state coordinator of disaster relief for the Baptist State Convention.

“We are thrilled to receive this donation from Wake Forest that will help so many families,” said Moss. “People are still in very bad shape from the flooding, even now.”

Removing the furniture from the residence halls is expected to take about a week. The items will then be taken to the warehouse in Grifton, where eligible families from surrounding communities can come in and select items that they need. Some of the student desks are expected to be sent to schools damaged by the floods for use in classrooms.