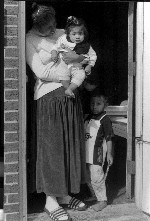 Cooley, a sociology major from Salisbury, has spent seven months listening to and talking with residents, going to neighborhood association meetings and sorting through surveys. At the Happy Hill Community Association’s next monthly meeting on April 24, Cooley will help the group outline a plan to make Happy Hill what the residents want it to be.

“A community is built on its assets, not its needs,” Cooley said. She presented her research at the Southern Sociological Society’s annual meeting in Atlanta earlier this month. “When you find the positives in people, you can then begin to draw from that and foster a community.” 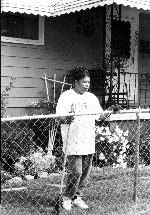 Cooley’s work with the Happy Hill community is her senior honor’s thesis in sociology. Students who graduate with honors in sociology complete an additional six hours of credit during their senior year. Her advisor for the writing and research project, Angela Hattery, said Cooley’s method-participatory action research-is at the forefront of a new movement in sociology.

“This method is cutting-edge,” said Hattery, an assistant professor of sociology at Wake Forest. “Typically, the sociologist sets the guidelines with the researcher’s goals at the forefront. Carol let the association guide the research and put their goals first.”

A total of 61 residents of the Happy Hill community responded to Cooley’s survey. They revealed that neighborliness was low and socialization among residents was a top concern. The survey addressed skills, neighborhood issues and areas that needed improvement such as housing and children’s programs. But an open-ended question that asked residents to describe Happy Hill revealed the most about their overall view of the neighborhood, Cooley said.

“That question was perhaps the most interesting because the answers were about feeling safe, trusting one another and getting respect,” she said. “It was the intangible things that residents were asking for.”

Cooley’s research also provided some tangible results. Information about residents’ specific skills will help the neighborhood association incorporate more people in neighborhood activities. Residents also shared skills they could teach and what they would like to learn, an area where Cooley found many opportunities to pair residents together. While many people said that they wanted to learn basic computer skills, others said they could teach them. Other responses showed the possibility for a mentoring program between adults and children. Now the neighborhood association can step in and help those people find each other, Cooley said.

“This research will encourage the association’s role as an organization that can successfully foster community building,” Cooley said. “It gives them the opportunity to increase hands-on activities where residents can actually see results, use their skills and feel needed.”

Wake Forest’s Volunteer Service Corps office connected Cooley with the Happy Hill community through Neighbors for Better Neighborhoods (NBN), a Winston-Salem Foundation group that provides money and training for neighborhood associations, including the one at Happy Hill. Levastian Glenn, director of NBN, introduced Cooley to the Happy Hill association and mentored her during the research process.

“Carol’s work was extremely valuable to this community,” Glenn said. “In the surveys, residents said they didn’t know each other and they felt disconnected. She gave them a voice.”

The project has also benefited students back on the Wake Forest campus. As a student in Hattery’s “Social Stratification and Inequality” class, Cooley has shared her new perspective in discussions about economic decline and working class neighborhoods.

“Carol has really given this class a grounding,” Hattery said. “She can confirm or dispute a theory, based on real research right here in our local community.”

Cooley also made the neighborhood the subject of a photographic essay for another sociology class, “Concerned Photographers and Their Work.” The 30 black-and-white photographs trace the history of Happy Hill and illustrate some of the issues facing the neighborhood. Three of the photographs are pictured here.

“This project has given me something I really cared about,” Cooley said. “To know that it may actually help this neighborhood gave me motivation to keep going.”

The media is invited to attend the April 24 neighborhood association meeting at Sims Recreation Center. Call the News Service to arrange coverage.