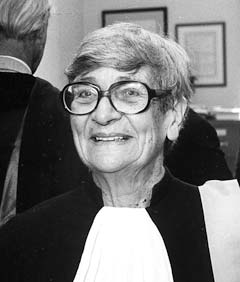 Germaine Bree, an internationally renowned authority on 20th century French literature and retired Kenan Professor of Humanities at Wake Forest University, died Sept. 22 at her home in Winston-Salem. She was 93.

Bree wrote and lectured extensively for decades on such writers as Marcel Proust, Andre Gide, Albert Camus, and Jean-Paul Sartre. She was a personal friend of Camus, who she knew for 15 years. She met him while she was working with the Resistance in Paris during World War II.

She was born in France in 1907. Much of her childhood was spent in the English-speaking Channel Islands. She became a U.S. citizen in 1952.

Her books include “Marcel Proust”, “Andre Gide”, “Camus”, “Twentieth Century French Literature” and “Camus and Sartre: Crisis and Commitment.” Her groundbreaking books on French writers remain standards in her field.

She was known as the “Dean of French Letters” in this country, said Byron Wells, professor of Romance Languages at Wake Forest and a colleague of Bree’s. “In large part, it was her writings on figures like Camus and Sartre that generated American interest in modern French literature.”

She is credited with introducing a generation of teachers and scholars to what were new French voices of the modern era.

“If you work your way through these literary works,” said Bree in a 1995 newspaper article, “it’s like talking with people who can lead you to come to terms with yourself, to open your eyes to what it is to be a human being in our society and our time.”

Bree also wrote “Women Writers in France” and edited a series of French poets in translation published by the Wake Forest University Press. She also edited several other collections of poetry and essays.

Bree was given leave from Bryn Mawr from 1943 to 1945 to serve with the French Army. She joined a volunteer ambulance unit and served in Algiers and France, first as the head of a hospital ward. Later, she was promoted to lieutenant and assigned to the intelligence section of the French Army in Algiers. She received a Bronze Star and was named to the Legion of Honor.

Bree was an internationally known authority on French writers and one of America’s most distinguished professors in the humanities, said Edwin G. Wilson, senior vice president at Wake Forest who recruited Bree to teach at the university. She won Wake Forest’s highest honor, the Medallion of Merit, in 1994.

“She was a splendid teacher,” he said. “Everyone who knew her was so stimulated by her brightness and wit.”

After she retired from Wake Forest in 1984, she was a visiting professor at Princeton University, Williams College and Ohio State University. She received honorary degrees from 26 colleges and universities, including New York University, Smith College, Mount Holyoke, Duke, Oberlin, Wake Forest, Brown, Michigan and Wisconsin.

She was licensed by the University of Paris in 1930. She was a member of the National Council of the Humanities and the American Academy of Arts and Sciences and was president of the Modern Language Association in 1975.

In her later years, she wrote a short autobiography in which she said, “Despite the ritual ‘bashing’ of academic institutions that American intellectuals seem to relish, my respect for the academic community has not flagged. Its dedication to learning, to integrity and freedom of thought are, I believe, active forces in shaping the American mind.”

A memorial service will be held at Wake Forest University in late October or early November.