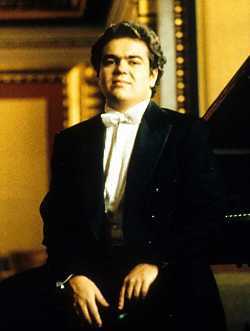 Volodos, who studied at Moscow Conservatory, made his critically acclaimed Carnegie Hall debut in 1998.

His first recording, “Volodos: Piano Transcriptions,” released in 1997, drew attention from music critics across the country. His most recent recording, a live performance of the Rachmaninoff Piano Concerto No. 3 with the Berlin Philharmonic Orchestra, was released in fall 2000 and was nominated for a Grammy.

The Wake Forest concert program will include works by Brahms, Schumann, Schubert and Liszt.

Born in St. Petersburg in 1972, Volodos began his musical training studying voice, following the example of his parents, who were professional singers. Although he had played the piano from the age of eight, he did not devote himself to serious piano study until 1987.

During the 1999-2000 season, Volodos toured the United States with the San Francisco Symphony conducted by Michael Tilson Thomas. In addition to recital performances across Europe and North America, Volodos also performed with the Rotterdam Philharmonic Orchestra, the Israel Philharmonic and the Boston Symphony.

Gramophone magazine wrote, “Volodos is unquestionably among the world’s master pianists, a virtuoso for whom even the most fiercely applied difficulties simply do not exist.”

Peter Kairoff, pianist and professor of music at Wake Forest, will give a pre-concert talk at 7:10 p.m. in the Balcony Room of Wait Chapel.

Tickets are $18 general admission and $13 for senior citizens and non-WFU students. Tickets can be purchased in advance beginning Monday, Oct. 15, from the University Theatre Box Office by calling 336-758-5295. Box office hours are noon to 5 p.m. weekdays. Tickets can also be purchased at the door the night of the performance. For information, call the Secrest Artists Series Office at 336-758-5757.