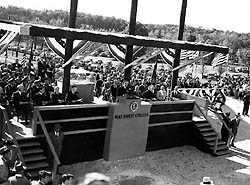 In celebration of the 50th anniversary of its Reynolda Campus groundbreaking in Winston-Salem, Wake Forest University will host a luncheon and special program on Oct. 29.

Then known as Wake Forest College, the school broke ground on its Reynolda Campus on Oct. 15, 1951. Wake Forest moved from the town of Wake Forest and opened the campus five years later, in 1956.

The private luncheon will bring together retired faculty members who were teaching in 1951, and the relatives and descendants of trustees and dignitaries involved in the groundbreaking ceremony.

Wake Forest President Thomas K. Hearn Jr. will open the public program in Benson University Center’s Pugh Auditorium. The program will feature presentations from many of the descendants. Photographs and other memorabilia from the groundbreaking will be on display. The program begins at 1 p.m.

Complete with red, white and blue bunting and gold and black buttons announcing the “new Wake Forest College,” the program will be a flashback to the Wake Forest and Winston-Salem of 1951.

“Except for the founding of Wake Forest, this was the most important event in the history of the school,” said Senior Vice President Edwin Wilson, who attended the groundbreaking ceremony as a first-year English professor. “For us to honor the descendants of those who made the move possible and re-create the mood of that day is important.” 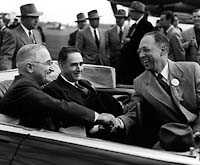 Descendants and relatives who will participate in the program include former governor of North Carolina Robert (Bob) Scott, son of William Kerr Scott who was governor of North Carolina from 1949-1953 and present at the groundbreaking; Barbara Babcock Millhouse, daughter of Charles and Mary Reynolds Babcock who gave the Reynolda property to Wake Forest; Lloyd P. Tate Jr., president of the Z. Smith Reynolds Foundation and great-grandson of R.J. Reynolds; Barbara Tribble Holding, daughter of Harold W. Tribble, president of Wake Forest from 1950-1967; and Murray C. Greason, a Wake Forest trustee and 1959 graduate.

The celebration will closely follow the order of the program from 1951, including the menu for the lunch served prior to the groundbreaking. After a southern lunch buffet of sliced ham and turkey, mashed potatoes, string beans and green peppers stuffed with corn and rice, the celebration will move to Pugh Auditorium.

The public part of the celebration will open with an NBC News film from 1951 documenting the groundbreaking. Wilson will introduce the news story, which was broadcast on Oct. 15, 1951. It features footage of Winston-Salem and President Harry S. Truman, who upon the invitation of Wake Forest President Tribble, turned the first shovel of dirt and gave the address at the groundbreaking ceremony. Truman was only the second U.S. President to visit Winston-Salem and just the sixth president to visit North Carolina.

“For Truman to come was a great tribute to Wake Forest, and exceedingly important for historical reasons,” said Wilson, a 1943 graduate of Wake Forest.

The program will also include President Tribble’s daughter sharing stories about her father, and former Gov. Bob Scott reading a greeting from Clifton Truman Daniel, grandson of President Truman. Student Government President Jordan Brehove will speak on behalf of Wake Forest students. The program will end with a student-led singing of the alma mater, “Dear Old Wake Forest.”

In 1946, the trustees of Wake Forest accepted a formal proposal from the Z. Smith Reynolds Foundation to move the college to Winston-Salem. President Tribble instructed that Wait Chapel would be the first building erected on the new campus and groundbreaking was scheduled for Oct. 15, 1951.

On the morning of the groundbreaking, a line of buses carried hundreds of students from Wake Forest to Winston-Salem. They were part of a crowd of an estimated 25,000 that gathered to watch the 2 p.m. ceremonies with President Truman.

The program began with the singing of “America.” Pastor of the First Baptist Church of Winston-Salem and Wake Forest alumnus Ralph A. Herring delivered the invocation, followed by opening greetings from Wake Forest President Tribble. Casper C. Warren, chairman of the Baptist State Convention, presented a $1 million check to the college, and Charles and Mary Babcock presented the deed to 300 acres of their property. Hubert E. Olive, president of the board of trustees, accepted the gifts.

Gordon Gray, president of the University of North Carolina and son of Bowman Gray, for whom the Wake Forest School of Medicine’s campus is named, brought greetings from Winston-Salem and other North Carolina colleges and universities. Wake Forest students sang their alma mater before President Truman gave his address.

After a prayer of dedication, President Truman turned the first spade of dirt on the new campus. He was followed by Olive, Tribble and Odus M. Mull, chairman of the Wake Forest Planning and Building Committee.

The Reynolda Campus of Wake Forest opened five years later with 14 buildings designed for 2,000 students. Today, the campus is made up of more than 30 buildings with an undergraduate enrollment of more than 4,000. Total enrollment- including students in the Wake Forest School of Medicine, Babcock Graduate School of Management, School of Law, Graduate School and Divinity School- is around 6,300. Recently, Wake Forest University and Virginia Tech (Virginia Polytechnic Institute and State University) announced plans to establish a joint School of Biomedical Engineering and Sciences.

“I don’t think anyone could have foreseen the Wake Forest of today,” said Wilson. “The achievement is far beyond even the greatest hopes of those present that day in 1951.”

The university is planning a large, public celebration in 2006 to commemorate the opening of the Reynolda Campus in Winston-Salem.