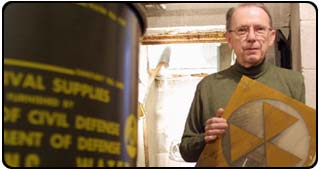 The underground structure, built by the house’s original owner in the wake of the 1962 Cuban Missile Crisis, was the destination of the first class field trip.

Hendricks says the course, which he is teaching for the second time, has particular relevance following the Sept. 11 attack.

For a generation who was in elementary school when the Berlin Wall fell, the terrorist attacks have provided a new lens through which to view the Cold War and the civil defense strategies it spawned.

“The course shows the students that we have faced these kinds of threats before and we lived through it,” Hendricks says.

Looking back to the Cuban Missile Crisis that led to widespread construction of fallout shelters, freshman Andrew Burke said, “The situation that our nation was faced with on September 11, 2001 and October 22, 1962 were two of the most serious circumstances that our nation has ever seen. What allowed our country to prevail in both of these situations was a great display of leadership and a population that came together in the time of need.”

From looking at— but not tasting— “survival biscuits,” to discussing the importance of fallout shelters as a diplomacy tool, the class is examining the fallout shelter’s place in history.

“They also were used as a bargaining chip with the Soviet Union—a kind of deterrence,” he notes. “Each side was trying to show the other that in the event of war they would survive.”

For individual projects, some students in the seminar class will interview grandparents who stocked their own fallout shelters and others will look at the domestic threat of communism. Hendricks also invited the professor who headed Wake Forest’s campus civil defense committee in the early 1960s to speak to the class.

Hendricks plays Tom Lehrer songs from the 1960s with lyrics such as “We’ll all fry together when we fry” to help students tap into the pop culture of the time.

“Humor is a way to deal with fear in a way that we otherwise couldn’t,” he said.

Students in the class watch civil defense films and Hollywood treatments of nuclear war, including “On the Beach” and “Dr. Strangelove.” Another field trip takes students on a tour of the basements of the buildings on the Wake Forest campus that were designated public fallout shelters.

“Students have been intrigued with the attitude towards women during the beginning of the Cold War, particularly the woman’s obligation to stock the shelter and prepare the family for crisis,” Hendricks says.

The students have also spent class time addressing the ethical issues of owning a shelter. Hendricks asks them the difficult question that confronted shelter owners, “Are you justified in keeping your neighbors out?”

They have also been interested in the connections between Cold War civil defense and the development of decentralized communications that eventually led to the Internet, he added. Downstairs from where the class meets, the students toured the basement area used by the U.S. Navy as an emergency regional communications station from 1963 to the early 1980s.

Now, Hendricks uses his own fallout shelter to store garden tools—“my version,” he says, “of beating swords into plowshares.”