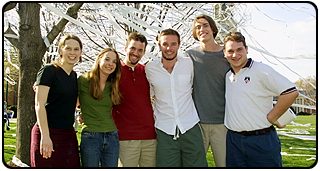 Both three-member Wake Forest teams drafted solutions to a complex problem regarding airline overbooking. The students were asked to construct a mathematical model that examined the effects of various overbooking strategies on airline revenue. They had to address alternatives for handling “bumped” passengers, heightened security at airports, the shrinking number of flights and other issues to find an optimal overbooking strategy.

As part of the contest, they had to draft a memo to the fictional airline’s chief executive officer summarizing their findings and analysis.

The Wake Forest teams received two of the six Outstanding Awards presented to
the teams that tackled the airline overbooking problem. They were among 522 teams representing 282 institutions from 11 countries that participated in the contest.

A new team— junior Elizabeth Perez of Bethesda, Md., junior Crystal Taylor of Hamptonville, N.C., and junior Anthony Pecorella of Raleigh— competed for the first time and also won top honors. For their solution, they also won an award for the best paper from the Institute for Operations Research and the Management Sciences (INFORMS). They will have their solution published in a math journal in the fall.

Each three-member team chooses one of two problems to solve. Separate awards are given for the best solutions to each problem. The problems are posted online at midnight on a Thursday and the team had until Monday at midnight to submit its paper.

The 18th annual contest is sponsored by COMAP Inc., a nonprofit organization that produces math-teaching materials. The contest is also sponsored by the National Security Agency.

Note to Editors: The math club will “roll the quad,” a tradition after Wake Forest athletic victories, to celebrate this mathematical achievement at 4 p.m. April 2.