WFU to give honorary degree to Fred Kirby II 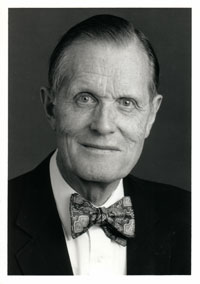 Wake Forest University will award Fred M. Kirby II an honorary doctor of laws degree at the university’s 160th commencement ceremony on May 20.

Kirby will be one of five honorary degree recipients at the 9 a.m. outdoor ceremony featuring commencement speaker John McCain, U.S. senator from Arizona.

Kirby is president and director of the F.M. Kirby Foundation, a family foundation that awards grants to a wide range of nonprofit organizations. In 2000, the foundation gave Wake Forest $5 million to support the construction of a five-story addition to Calloway Hall, home to the Calloway School of Business and Accountancy. The addition will be named the F.M. Kirby Wing, in honor of Kirby and his family. It will be complete by Fall 2003.

Kirby has been chairman of the Alleghany Corporation in New York since 1967. He is also a director emeritus of the National Football Foundation and College Hall of Fame, and has served on several boards of organizations and corporations.

A 1942 graduate of Lafayette College, Kirby was president of his class and a member of the school’s 1940 undefeated football team. In 1947 he graduated from Harvard Graduate School of Business Administration.

In 1966, Sports Illustrated awarded Kirby its Silver Anniversary All-American Award and the National Collegiate Athletic Association presented him with a 25th anniversary citation.