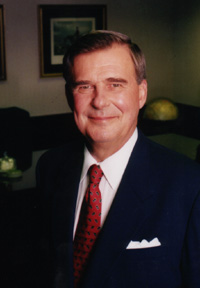 Friends and associates of Wake Forest University trustee L. Glenn Orr Jr. of Winston-Salem have established a professorship in his name at the university.

The L. Glenn Orr Jr. Professorship of Banking and Financial Services has been established for the university’s Babcock Graduate School of Management.

Gifts to the professorship’s endowment will provide for a professor to lead the Babcock School’s efforts within the financial services industry, where 42 percent of the school’s recent graduates are employed.

The group that created the professorship in Orr’s honor was headed by Wake Forest trustees Victor I. Flow Jr. of Winston-Salem and Ronald E. Deal of Hickory, both university alumni and long-time friends of Orr.

“We’re pleased to honor Glenn in this way,” Flow said, citing Orr’s long commitment to Wake Forest, the region and the banking community.

Charles R. Moyer, dean of the Babcock School, said “We are delighted to be the beneficiaries of the Orr Professorship. This professorship is especially meaningful because of the tremendous contributions Glenn Orr has made to the financial services industry and especially to the Piedmont Triad region.”

Orr was also the recipient recently of Wake Forest’s Pro Humanitate Award, given to recognize exemplary university leadership and service.

The Babcock School has been ranked among the top business schools in the
world in each of the five major business school rankings—The Wall Street Journal, Forbes, Business Week, Financial Times, and U.S. News and World Report.

Only 33 schools worldwide share the distinction of this across-the-board ranking success.