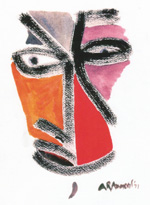 “Corapeake,” a multi-media documentary of the small North Carolina town, will be shown in the upstairs gallery. “Pattern and Possibility,” watercolor paintings by poet A.R. Ammons, will be on exhibit in the downstairs gallery. The paintings were inspired by his poetry during a 20-year time period. Both exhibits run from Oct. 11 – Nov. 13. 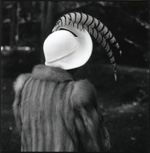 An opening reception for both exhibits will be held Oct. 11 from 7-9 p.m. in the Hanes Gallery, located in the Scales Fine Arts Center. It is free and open to the public.

“Corapeake” is the product of more than five years of photographing, filming and taping conversations with residents of the Gates County town. The exhibit will feature Kendall Messick’s black-and-white photographs accompanied by a soundtrack of original music and oral history spoken by the residents. Many of the town’s residents who worked with Messick on the project will be at the exhibit’s Wake Forest opening.

The project was inspired by a friendship started between two Wake Forest students—the artist, Messick, and Brenda Parker-Hunt, a Corapeake native. Messick, who grew up in Delaware but had family in North Carolina, said Parker-Hunt’s descriptions of her tiny hometown reminded him of his grandfather’s stories about growing up in the South.

“Brenda always spoke about Corapeake as if it were a magical place, a utopia,” Messick said.

Messick, who graduated in 1987, spent several years in telecommunications sales and management after leaving Wake Forest. After taking some night classes in photography, he started hosting shows to exhibit his work and began to sell his photographs. The part-time hobby soon became his full-time job. When he made his first trip with Parker-Hunt to Corapeake in 1995, he shot more than 25 rolls of film photographing her relatives and neighbors.

“That was the moment when everything came together for me creatively,” said Messick. “In many ways, ‘Corapeake’ is a metaphor about memory— the beauty is not just what we remember, but how we frame what we remember.”

The Hanes Gallery’s downstairs exhibit, “Pattern and Possibility,” features 54 watercolor paintings by A.R. Ammons, a nationally acclaimed poet and 1949 graduate of Wake Forest. The exhibit, from the personal collection of Emily Herring Wilson of Winston-Salem, is the largest collection of Ammons’ watercolors ever on public display.

“I sensed Ammons’ need to use this wordless medium of watercolor in a daily rhythm of flow, opening up parts of himself to sustain the mental push of poetry,” said Alix Hitchcock, curator of the exhibit.

Ammons, a native of Whiteville, published 24 books of poetry during his lifetime. Among his many honors were two National Book Awards, the Bollingen Prize, the National Book Critics Circle Award and the MacArthur Award. He taught at Cornell University from 1964 until his retirement in 1998 and frequently visited his home state and alma mater. Ammons died in 2001.