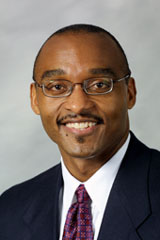 Although African-Americans have been free from the bonds of slavery for more than a century, many African-Americans remain subservient to the notion that “if it’s white, it’s right,” says a Wake Forest University biblical studies expert and author of a new book that explores the New Testament message of Paul to the Galatians through the perspective of African-American experience.

“It’s time for us to be free as African-Americans. The chains around our bodies dropped off in the nineteenth century, but there are chains on our minds,” says Brad R. Braxton, the Jessie Ball duPont Assistant Professor of Homiletics and Biblical Studies at Wake Forest’s Divinity School. “Freedom, that is ideological freedom, mental freedom, religious freedom and economic freedom, must now be our agenda in the twenty-first century. My book is an act of intellectual abolition. Let us be free in our minds.”

In his book, “No Longer Slaves: Galatians and African American Experience,” published recently by The Liturgical Press, Braxton closely examines Paul’s letter to the Galatians as a six-chapter biblical text that deals primarily with the issue of race relations between Jews and Gentiles.

Braxton interprets Paul’s message to the Galatians through the lens of African-American experience, drawing meaning that African-Americans can use in everyday life. According to Braxton, the work is an attempt to invite readers to start thinking about biblical texts in ways that are relevant for modern life and not solely from a “white” perspective.

Braxton conceived the idea for the book while he was a student at Oxford University in England, a time when he found himself cut off from the African-American church experience and longed for that interaction. He describes that time as difficult for a young black man, who had grown up the son of a Baptist minister in Salem, Va.

He says the book’s primary audience is the African-American church, specifically congregations and ministers who are interested in looking at the implications of race and biblical interpretation in the life of a Christian community. In addition, scholars should find the book helpful because it offers a new way of looking at the Bible that has not been available because of the relatively small number of African-American biblical scholars, Braxton says.

“We are at a place now, in light of the push for globalization in the academic community, where we can no longer afford to educate our students from simply an American or Western European view of biblical scholarship,” Braxton remarks. “The book is an attempt to offer resources to my colleagues for their own thinking about New Testament interpretation and also for their courses. It is written as a text for courses that ask, ‘How is the bible being interpreted by and for African-Americans?’”

Braxton insists that rather than view themselves, their stories or their culture through the standards that white society has come to accept, African-Americans must begin to interpret cultural and religious experiences by standards from within the African-American community. Braxton illustrates his idea by framing his understanding of blackness in biblical terms, contending, “African-Americans have taken the stone that the builders rejected – the physical traits despised by the dominant culture – and made them the cornerstone.”

The final section of the book interprets Paul’s letter to the Galatians for African-Americans. Braxton provides a brief historical overview of the entire text and offers an interpretation that leans heavily on a “reader-response criticism,” an interpretive method that allows him to connect modern African-American experience to Paul’s ancient message.

Braxton, an ordained Baptist minister, is also the author of “The Tyranny of Resolution: 1 Corinthians 7:17-24.” He has published several sermons and a recent essay on the role of the black church in the new millennium. Before joining the Wake Forest Divinity School faculty, he served for five years as senior pastor of the Douglas Memorial Community Church, a 600 member interdenominational congregation in Baltimore. Braxton is a frequent guest preacher and lecturer in local churches.

“In the book, I offer another way to think our way through the Bible’s message, but I do it as an insider,” Braxton says. “I am seeking to demonstrate how one can take one’s Christian commitments seriously without subscribing to only one understanding of the Bible’s role and meaning.”