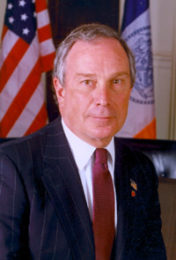 The outdoor ceremony will begin at 9 a.m. on Wake Forest’s University Plaza (the Quad).

Douglass Bailey, associate professor of urban ministry at Wake Forest’s Divinity School and executive director of the university’s Center for Urban Ministry Inc., will deliver the baccalaureate address May 18 at 11 a.m. in Wait Chapel.

Bloomberg, author of the autobiography “Bloomberg by Bloomberg,” became the 108th mayor of New York City in 2002. A graduate of Johns Hopkins University and Harvard Business School, he started working on Wall Street with Salomon Brothers in 1966. By 1972, Bloomberg was a partner in the firm and supervisor of its information systems, among other areas.

In 1982, Bloomberg started his own company, Bloomberg L.P., a financial information service that collected and analyzed securities data instantaneously. By 2002, the company had more than 165,000 subscribers, more than 8,000 employees and more than 100 offices worldwide. Bloomberg entered the media business in 1990, launching a news service, then radio, television, Internet and publishing operations.

Bloomberg has served on the boards of several civic, cultural, educational and medical institutions, including the Lincoln Center for Performing Arts, the Metropolitan Museum of Art, the Police and Fire Widows’ and Children’s Benefit Fund, and the S.L.E. (Lupus) Foundation. He was also the former chairman of the board of trustees of Johns Hopkins University. The university’s Bloomberg School of Public Health is named in his honor.

Baccalaureate speaker Douglass Bailey has been recognized for his imaginative leadership in urban ministry. A 1960 graduate of Wake Forest, Bailey received the university’s 2001 Distinguished Service Award. He also received the 2002 Humanitarian of the Year Award of the Memphis chapter of the National Conference for Community and Justice. As rector of Calvary Episcopal Church in downtown Memphis for 23 years prior to joining the Wake Forest faculty in 2002, Bailey organized the creation of 10 non-profit urban ministries.

Editor’s Note: Photos of Bloomberg and Bailey are available upon request.