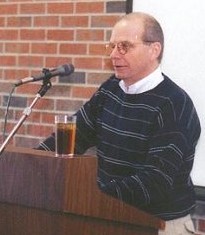 Riley Hollingsworth, special counsel to the Federal Communications Commission, will be honored by the Wake Forest University Amateur Radio Club on March 6. The program will be held at 7 p.m. in Wingate Hall, Room 302. The event is free and open to the public.

Formed in 2001, the club has recently created a chapter for alumni of Wake Forest. Hollingsworth will be the inaugural member of the chapter. After the presentation of a commemorative plaque, Hollingsworth will speak on the importance of amateur radio operators and their roles and responsibilities in the community.

“Riley Hollingsworth has become an icon within the amateur community because of his dedication to making amateur radio a service of which anyone can be proud to be a member,” said Chris Plumblee, the club’s president. “Mr. Hollingsworth deals with issues that are real and immediate to the average radio amateur.”

Hollingsworth is a 1973 graduate of the Wake Forest University School of Law.

For more information, call the club’s advisor, Ken Hoglund, at 336-758-5120. Hoglund is a professor of religion at Wake Forest.