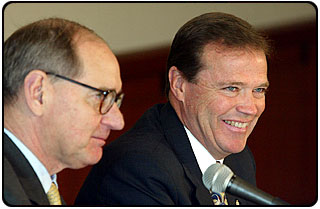 Wake Forest University and its athletics director, Ron Wellman, have reached an agreement in principle on a contract renewal that will keep Wellman at the helm of the athletics program for years to come. The terms of the new contract were not released.

“We are very pleased that Ron Wellman will continue to lead our athletics department,” said Thomas K. Hearn Jr., president of Wake Forest. “During his tenure at Wake Forest, he has raised our program to new levels, assembling a superior group of coaches and staff. He is the senior AD in our conference, and is a leader in ACC matters.”

“He has also done an excellent job of upgrading and expanding our athletic facilities,” Hearn added. “Perhaps of utmost importance, Ron directs the program on the basis of those academic and ethical standards that are intrinsic to Wake Forest as a university.”

“We are delighted that Ron, his wife, Linda, and his family will remain as members of the Wake Forest and Winston-Salem communities,” Hearn continued. “We appreciate their participation and contributions to our university and city.”

Hearn added that he appreciates the extraordinary support that Wake Forest alumni and friends have demonstrated recently for Wellman’s continued leadership of Wake Forest athletics.

“People close to our university have enthusiastically expressed their desire for Ron to remain and continue leading Wake Forest athletics to new levels of achievement,” Hearn said.

Wellman expressed his satisfaction with the university and the growing potential of its athletics program.

“I am pleased that our relationship with Wake Forest will continue,” Wellman said. “The 10-plus years that we have been associated with the university have been extremely enjoyable.”

“I am convinced that the future of Wake Forest athletics is even brighter than our past with the group of coaches and administrators that we have assembled to lead our program,” Wellman added. “As one of our student-athletes recently told me, ‘It’s a great time to be a Deac!’ I agree.”

Wellman’s decision to remain at Wake Forest follows his successful efforts to secure extended contracts with two successful coaches—men’s basketball coach Skip Prosser and football coach Jim Grobe. Prosser, one of four Wake Forest coaches within the past year named ACC coach of the year, led his team to the regular season championship. Grobe, whose team finished 7-6, led his team to the Seattle Bowl championship. Both signed 10-year contracts.

Numerous improvements to athletics facilities include the construction of the Kenneth D. Miller Center and a new Bridger Field House, as well as the W. Dennie Spry Soccer Stadium and the Indoor Tennis Center. Other facilities have undergone renovations.