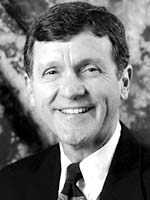 In a modern society that is increasingly fragmented, Wake Forest University Divinity School Dean Bill Leonard says he offers his latest book, “Baptist Ways: A History,” not only as a broad historical survey of Baptist faith and practice, but as a tool for all denominations to use when dealing with questions raised by religious pluralism.

“We are at a time when it is very important for religious groups to reexamine their identity, and the Baptists are no exception,” says Leonard, an ordained Baptist minister and church history expert. “Identity is extremely important, and generic Christianity is highly problematic. I think knowing who we are religiously gives us a place to stand in order to reach out to other groups. I hope my book will foster what I call a hospitable traditionalism that gives us a place to stand, not to turn inward on ourselves, but to reach out to the world, to other groups and other connections.”

The book, a comprehensive history that traces significant aspects of Baptist history from the 17th through the 20th centuries, deals heavily with the diversity of life in the early years of the Baptist movement. It is an exercise that Leonard says is crucial for the future survival and growth of the Baptists. “I was very concerned to talk at length about who the Baptists were and have been,” Leonard says. “The way Baptist church government works, controversy and even schism is not just possible it’s probable. You have this continued tension between the lone individual standing up for conscience and the community examining and verifying conscience.”

In the book, Leonard deals at length with divisions and schism within the Baptist denomination, and he highlights 13 points that most Baptists agree on in the epilogue to the book. Among those points are the belief that God is the Creator of Life and the object of faith; Jesus Christ, the living Word of God, is the Savior of the world; the Bible is the written word of God; and faith in Jesus Christ is both personal and communal.

In addition to dealing with mainstream Baptist history, Leonard gives considerable attention to underreported aspects of Baptist development like the contribution of women and minorities and the history of music and hymns within the Baptist movement.

“I wanted to try to give a bit more attention to aspects of Baptist life that had not been addressed – Baptist poets, hymn writers, diversity of worship styles – and, where possible, grassroots aspects of Baptist life,” Leonard says. “Also, the role of women has often been neglected in Baptist history. Women were extremely important particularly in the formation of mission societies and the early mission efforts, and their role in terms of leadership on the local level was very evident.” Leonard’s more than 400 page book is one of only three comprehensive histories of the Baptists written in the past 50 years, and it was more than seven years in the making. The American Baptist Historical Society, in consultation with Judson Press, asked Leonard to write the book, and he started the work while he was chair of the department of religion and philosophy at Samford University in Birmingham.

Leonard is the author or editor of 14 books, including “Christianity in Appalachia: Profiles in Regional Pluralism,” “A Dictionary of Baptists in America,” “Becoming Christian: Dimensions of Spiritual Formation” and “God’s Last and Only Hope: The Fragmentation of the Southern Baptist Convention.” He holds a doctor of philosophy degree from Boston University, a master of divinity degree from Southwestern Baptist Theological Seminary and a bachelor’s degree from Texas Wesleyan University.