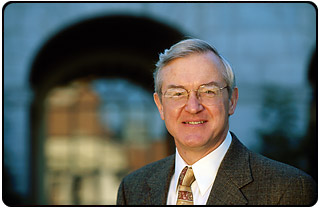 Paul D. Escott announced Sept. 8 that he is resigning as dean of the College of Arts and Sciences at Wake Forest University effective June 30, 2004, but he will remain at the university as Reynolds Professor of History.

“I intend to return to teaching and research full time, including working on a new book,” said Escott, who has been dean since the summer of 1995.

“It is a privilege to serve the faculty as dean,” added Escott. “Our faculty is talented and ambitious and those facts make the dean’s job easier and much more pleasant.”

“Paul Escott is simply one of the most effective deans I have encountered over the years,” Gordon said. “He has been a forceful and articulate spokesperson for the College, and he has provided the College with wise and creative leadership during a time of great change and significant achievement. He will be extremely difficult to replace.”

Gordon will appoint someone soon to chair a committee to search for a new dean of the College. He added that he will seek input from the College community to put together a search committee.

“Our goal is to form a search committee that can be effective in developing a pool of candidates who are highly qualified for the dean’s position,” Gordon said. “We’ll want a committee that represents the different constituencies of the College.”

Escott joined the Wake Forest history faculty in 1988, and was named Reynolds Professor of History in 1990, a position he has held while serving as dean.

He played a key role in developing and implementing Wake Forest’s Undergraduate Plan, launched in the mid-1990s to enhance undergraduate education. Originally called the Plan for the Class of 2000, it included, in part, a technology initiative that made Wake Forest an internationally regarded leader in the use of technology in education.

The technology initiative called for providing undergraduates with laptop computers and printers, establishing wired and eventually wireless access to the Internet throughout the university’s Reynolda Campus, installing the latest in multimedia hardware in classrooms, and creating a vast support system to assist all university computer users, including students, faculty and staff.

Escott gained national recognition early in his tenure at Wake Forest when he organized a major symposium called “The Minds of the South: W.J. Cash Revisited.” The 1991 symposium brought scholars of southern history to the campus for extensive discussion of the racial, political and economic changes that swept over the South since the 1941 publication of “The Minds of the South,” a classic history written by Wake Forest graduate W.J. Cash.

Escott teaches the history of the Civil War at Wake Forest and has written a number of books and articles in Southern and Civil War history. He holds a bachelor’s degree from Harvard University, as well as a master’s degree and a doctorate from Duke University.