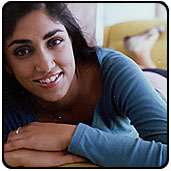 Rosita Najmi, a Wake Forest University senior, has been named one of Glamour magazine’s “Top Ten College Women” for 2003. Najmi, who co-founded a nonprofit organization to provide medical supplies to Benin, West Africa, is featured in the October issue.

Najmi is an economics major from Knoxville, Tenn. She and a fellow student started the outreach project after a 2001 study abroad trip to Benin led by Sylvain Boko, associate professor of economics. Najmi has also traveled to Vietnam to help build a schoolhouse and worked as a translator for a women’s rights group.

In its 46th year, Glamour’s Top 10 College Women Awards spotlights ten college women from across the United States with an annual competition that recognizes leadership on campus, involvement in the community, excellence in their field of study, as well as their unique, inspiring goals. Each winner receives a cash prize, a trip to New York City, and opportunities to meet with top professionals in a variety of fields, including education, publishing, government and music.