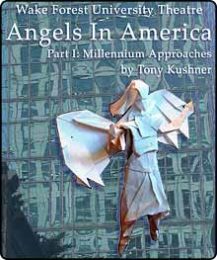 Wake Forest University Theatre will open its season with Tony Kushner’s “Angels in America Part One: Millennium Approaches” at 7:30 p.m. Sept. 26. This performance offers the first part of Kushner’s original two-part, seven-hour, Pulitzer Prize-winning play “Angels in America: A Gay Fantasia on National Themes” and is presented as part of the university’s 2003-2004 celebration of the theme “Fostering Dialogue: Civil Discourse in an Academic Community.”

The 1993 play, which also earned two Tony Awards and was named one of the 10 best plays of the 20th Century by London’s National Theatre, is set in the mid-1980s when the AIDS epidemic was being uncovered. It reflects the uncertainty and fear of the nation’s conscience and tackles a broad range of topics, including sex, politics, religion and AIDS.

Of “Angels in America,” Newsweek wrote, “Daring and dazzling! The most ambitious American play of our time: an epic that ranges from earth to heaven; focuses on politics, sex and religion; transports us to Washington, the Kremlin, the South Bronx, Salt Lake City and Antarctica; deals with Jews, Mormons, WASPs, blacks; switches between realism and fantasy, from the tragedy of AIDS to the camp comedy of drag queens to the death or at least the absconding of God.”

Brook Davis, assistant professor of theatre at Wake Forest, will direct the play, which stars five men and three women.

All performances begin at 7:30 p.m. in the Scales Fine Arts Center’s MainStage Theater, except a 2 p.m. matinee Oct. 5. Tickets are $12 for adults, $5 for students, and may be purchased at the University Box Office or by calling 336-758-5295. The box office is open weekdays, noon-5:30 p.m. For more information, visit the Wake Forest University Theatre’s Web site at www.wfu.edu/theatre.

The University Theatre production of “Angels in America Part One: Millennium Approaches” precedes Tony Kushner’s scheduled Nov. 13 visit to Wake Forest. Kushner will lead a free, public lecture in Wait Chapel at 7 p.m. Nov. 13, and he will speak to a class of students in the theatre department during his time at Wake Forest. The visit is sponsored by the theme year committee, the theatre department, the journalism program and The Adam Foundation.

The yearlong “Fostering Dialogue” celebration includes several events intended to raise provocative questions about how dialogue is practiced at Wake Forest and within the larger society. Other events scheduled during the year include a special seminar through the university’s communication department focused on dialogue and production of documentaries, a student dialogue program with senior university administrators, a Hyde Park Speakers’ Corner Day and two film series.

Additional information about the theme year’s events is posted on the “Fostering Dialogue” Web site at http://themeyear.wfu.edu/. The 2003-2004 theme year is the eighth theme year recognized at Wake Forest. Previously, the university celebrated the Year of Health and Medicine (2002-2003), the Year of Unity and Hope: Pro Humanitate at Work (2001-2002) and the Year of Ethics and Honor (2000-2001).

“Fostering Dialogue: Civil Discourse in an Academic Community” is the first of two theme years to be funded through a $1.9 million grant from the Lilly Endowment of Indianapolis. The grant, awarded to Wake Forest in 2001, is also being used to support a center for vocational exploration for undergraduate students for five years at Wake Forest. The Pro Humanitate Center opened in 2002 and offers programs designed to encourage students to explore the nature of vocation as they consider possible careers, including the ministry.