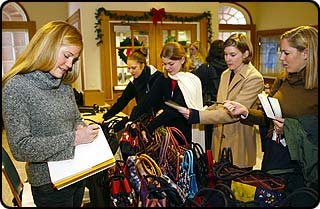 Jennifer Woodsmall, selling her handbags during a campus “trunk show.”

Wake Forest University has been selected as one of eight Kauffman Campuses by the Ewing Marion Kauffman Foundation and will receive a $2.16 million grant to further entrepreneurship on campus, the foundation announced Dec. 15.

In July, the foundation selected 15 universities nationwide to apply for the grants. Wake Forest presented its proposal to the foundation’s board in Kansas City, Mo., Dec. 11.

“We are excited about seeing the possibilities that entrepreneurship can create on a liberal arts campus like Wake Forest,” said Carl Schramm, president and CEO of the Kauffman Foundation. “Wake Forest has already proven itself as a community dedicated to supporting students with new venture ideas. We are pleased to be able to support the university’s efforts.”

“We believe Wake Forest possesses a unique ability to develop a model for making entrepreneurship part of the campus culture at a liberal arts university,” said Wake Forest Provost and Acting President William C. Gordon. “This grant from the Kauffman Foundation will help us provide a strong foundation in entrepreneurship teaching, research and outreach.”

The university’s new office of entrepreneurship and liberal arts will draw on the strengths and resources of the university’s College of Arts and Sciences, Graduate School of Arts and Sciences, Calloway School of Business and Accountancy, Babcock Graduate School of Management, School of Medicine and Winston-Salem’s Piedmont Triad Research Park, in which the university is heavily involved. Page West, Benson-Pruitt Associate Professor of Business and principal investigator of the proposal, said the idea is to support any student from any discipline, from freshman year to graduate school, who wants to learn about and pursue entrepreneurship.

“We believe that liberal arts and entrepreneurship are not at odds with each other, that in fact they may be mutually reinforcing concepts,” West said. “Staging a new theater production or museum event, finding novel ways to get citizens more involved with the democratic process, developing new educational programs targeting at-risk schoolchildren, are all types of entrepreneurship and social entrepreneurship that the Kauffman Foundation definition embraces. Entrepreneurship is no longer relegated to business programs alone. Our students from all over campus have a high level of interest and energy in entrepreneurship.”

Students from various departments, including psychology, economics and history, are already utilizing university resources for help in starting or furthering their own businesses. Eight students shared their own personal business stories for the Kauffman proposal, including testimony on how the grant money would help students like themselves.

Jennifer Woodsmall, a senior from Kansas City, Kan., started J.L. Lane, a company that sells handbags made by Vietnamese women to U.S. department stores, nearly two years ago. Woodsmall got the idea after visiting small Vietnamese villages during a semester abroad in Southeast Asia.

“I think so often when you’re not in the business school, you’re not trained to think in that business sort of way,” said Woodsmall, a psychology and religion major. “It will be great for Wake Forest students from different majors to have access to more entrepreneurship resources.”