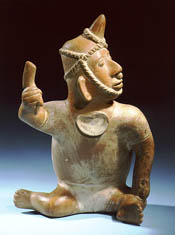 The exhibit, which will run Feb. 27 – May 22, provides a glimpse into the cultural heritage of the people of West Mexico. Many of North Carolina’s Hispanic community have immigrated from this area. The exhibit will also feature four museum programs: three public lectures and a musical performance.

According to Stephen Whittington, Museum of Anthropology director, the large ceramic figures of people and animals reveal how the ancient people who once lived in what are now the Mexican states of Jalisco, Nayarit and Colima viewed many aspects of their culture, including religion, life after death, society, rulers and the natural world.

The “Images” exhibit, which is a traveling exhibit, is part of the Palmer Collection, one of the premier collections of pre-Columbian art in the United States. It was developed by Whittington in 1999 while he was director of the Hudson Museum at the University of Maine.

“The number and quality of objects in ‘Images’ have not been exhibited within the Piedmont Triad before,” said Whittington, “Charlotte and Raleigh are the closest places the public has been able to view similar objects until now.”

The museum programs featured with this exhibit begin with a lecture on March 3 at 7:30 p.m. titled, “Middle Formative Antecedents to the Shaft Tomb Culture.” Joseph Mountjoy from the University of North Carolina at Greensboro will present new data from his excavations at the El Pantano cemetery and relate them to the exhibit.

On March 25 at 7:30 p.m., the museum will offer “Warriors, Shamans and Athletes: The Ballgame in Western Mexico,” a lecture by Michael Whittington from the Mint Museum of Art. The lecture will focus on the ancient West Mexican ballgame and related artwork.

The third program, a Secrest Artists Series musical performance by the Masters of Mexican Music, will be presented March 26 at 7:30 p.m. in Wait Chapel. The musical group is comprised of 26 musicians from four regions of Mexico, including a mariachi group from Jalisco.

The museum’s final lecture, “Insects and Ancient Figurines: New Evidence from West Mexico,” will be presented April 22 at 7:30 p.m. Robert Pickering of the Buffalo Bill Historical Center in Cody, Wyo., will discuss the connection between forensic anthropology and West Mexican archaeology.

Admission to the museum and all lectures is free.

The “Images” exhibit is sponsored by Lowes Foods and the Hispanic League of the Piedmont Triad. The lectures are supported by the North Carolina Humanities Council, a foundation supported by state and federal funds and private gifts. The council encourages and assists in public education activities in the humanities for adults.