WFU theatre presents The Musical “Into the Woods” 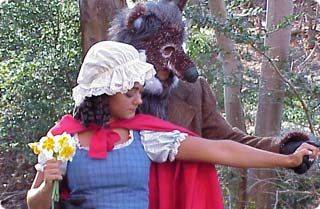 This Tony Award-winning play is a light-hearted musical about a childless couple that must venture into magical woods to find mystical items in order to have children. A combination of beautiful songs and inventive lyrics, the play is a fun, insightful look into what can happen after “happily ever after.” The Washington Post calls it a “delicious spin on Cinderella, Jack and the Beanstalk, and other fairy tales.”

Directed by Wake Forest’s Assistant Professor of Theatre Cindy Gendrich, the production will include a cast of 22 Wake Forest students, a production team of 13 students and faculty, and musicians from the Wake Forest Orchestra.

Tickets cost $12 for the general public and $5 for students and can be purchased by visiting or calling the Wake Forest Theatre Box Office at 336-758-5295, Monday-Friday between 12 p.m. and 5:00 p.m. Tickets are also available at the door one hour before performances.