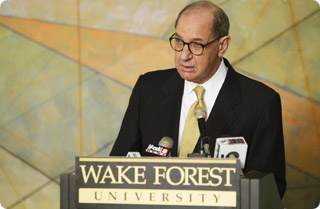 Wake Forest University President Thomas K. Hearn Jr. announced April 19 that he is immediately resuming his responsibilities as president, after taking off several months to recuperate from surgery and treatment for a brain tumor.

Hearn also announced that he will retire from the university’s presidency in June 2005, in keeping with plans he made well before experiencing symptoms of illness or receiving his medical diagnosis last fall. Upon his retirement, he will have served 22 years as Wake Forest’s president. He came to the university as president in 1983.

Accompanied by Murray Greason, chairman of the Wake Forest Board of Trustees, Hearn made the announcements at a campus press conference.

“I’m pleased to announce that beginning today, with the approval of Chairman Greason, I am returning to the active presidency of Wake Forest,” Hearn said. “It is wonderful to be able to come back, and I look forward to resuming the responsibilities of this position.”

Hearn began treatment in October 2003 for a brain tumor at Wake Forest University Baptist Medical Center. In December, he underwent surgery for the tumor. At that time, Hearn announced that he would take significant time to recuperate, and that Greason had appointed Wake Forest Provost William C. Gordon to serve as acting president during his recovery.

“In taking this step, I have high praise for the work done over the past months by our provost, Bill Gordon,” Hearn said at the press conference. “The job of provost is demanding, and Dr. Gordon’s role prior to my departure was already quite intense.” (The university on April 5 appointed Ajay Patel as dean of the Babcock Graduate School of Management; a search continues for a successor to Paul Escott, who is stepping down as dean of the undergraduate College of Arts and Sciences in June 2004.)

“He (Bill Gordon) has been especially central in addressing the budget issues that Wake Forest, along with others in higher education, have had to confront,” Hearn told reporters. “As he turns his full-time attention now back to the job of being our provost, I have asked Dr. Gordon to lead and supervise the budgetary steps outlined to you earlier this month.”

On April 6, Wake Forest announced an $812 million university budget for fiscal year 2004-2005 that will include increases on the Reynolda Campus only for rising health care costs and substantially higher property/casualty insurance rates. On that date, the university unveiled a multi-point initiative to position the school financially and academically as the nation’s economy recovers.

In addition, Hearn expressed his appreciation to “the other vice presidents and deans for their extra assumption of duties (during his recuperation). We have a great executive group, and I am in their debt.”

Hearn also thanked countless well-wishers who have written, e-mailed and called him and his wife since last fall to convey their support.

“Your words of encouragement and comfort and your prayers have been essential to the progress I have made during these difficult months. We want you to know just how important your support is to us,” Hearn said, referring also to his wife, Laura.

Hearn had words of praise for those who provided his medical treatment.

“I want to thank publicly the absolutely superb medical team from the Wake Forest University Baptist Medical Center who have attended to me with candor, compassion, and above all, remarkable skill,” Hearn said.

For the remainder of his presidency, Hearn considers one of his most important jobs to be the successful completion of Wake Forest’s $600 million capital campaign. At this point, the university has received gifts and pledges totaling $505 million. The counting period for the campaign runs through June 30, 2006.

At the press conference, Greason announced that “we have begun to put together the major components of a search process to identify and recruit Dr. Hearn’s successor.”

“Wake Forest has only had twelve presidents in our 170-year history, so I am mindful of the import of this task,” Greason said. “Within the next several weeks, I will provide you with specific information about the search when the remaining components have been fully planned.”

Plans call for a comprehensive and inclusive search by a committee representative of the university’s constituents, he said.

“Today, I will tell you that it will certainly be a careful search; that the search committee will be representative of Wake Forest’s constituents; and that there will be clear procedures to solicit input from all our constituencies,” Greason added.