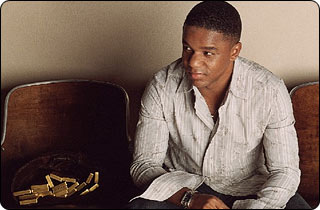 Award-winning vibraphonist-composer Stefon Harris and his jazz quintet Blackout will perform at Wake Forest University at 7:30 p.m. Sept. 9 in Brendle Recital Hall in Scales Fine Arts Center. The performance is the first of five concerts in the 2004-2005 Secrest Artists Series.

“Jazz is always popular. Last year, Brad Mehldau was well attended, and we’re pleased to offer another jazz concert. This will be the first time Wake Forest has ever had a jazz vibraphonist perform, and Stefon Harris is a stand-alone man on this instrument,” said Lillian Shelton, director of the Secrest Artists Series.

Thirty-year-old Harris is a celebrated master musician who is steeped in jazz tradition yet integrates modern influences. He plays both marimba and the vibraphone, a percussion instrument that resembles a xylophone but has metal keys and a motor that turns pulsators to create a vibrato sound. He sets up his instruments in a right angle and moves from one to the other, sometimes playing them simultaneously with two mallets in each hand, and produces a shower of complex musical arrangements.

According to Harris, his goal is to move forward with jazz as an art form, but black out the definition and opinions that exist about jazz — hence his ensemble’s name. Blackout’s members include Casey Benjamin on alto sax, Derrick Hodge on acoustic bass (stand in for Darryl Hall), Marc Cary on electric piano and keyboard and Terreon Gully on drums.

Harris’ music is his version of jazz funk — a hybrid of acoustic music and progressive sounds that blend hip-hop, R&B and intricate jazz. Rising quickly in popularity, Harris and Blackout are featured on Harris’ latest Blue Note release, “Evolution.” They have performed to sold-out crowds at The Kennedy Center and North Sea Jazz Festival and received critical acclaim.

Harris is a New York native and graduate of the Manhattan School of Music, where he received a bachelor’s degree in classical music and a master’s in jazz performance. He released his first solo disc, “A Cloud of Red Dust,” in 1998. Five releases later, he has won numerous awards, including three consecutive Grammy nominations.