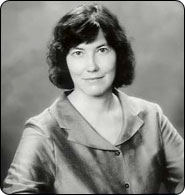 Jeanne Moskal, professor of English at the University of North Carolina at Chapel Hill, will give a free lecture on 19th-century women missionary authors at 4:30 p.m. Sept. 9 in DeTamble Auditorium in Tribble Hall. The title of her lecture is “‘To Burst the Confines of my Sex’: Women Missionary Authors, 1792-1978.”

Moskal became interested in travel literature in 1996 while editing Mary Shelley’s travel books for the standard edition of her works. Since then, she has worked on two travel-literature projects, one on British travel writers and the politics of the Napoleonic Wars and the other on women missionary authors, for which she won fellowships from Union Theological Seminary in New York and Harvard Divinity School.

Moskal published her first book, “Blake, Ethics, and Forgiveness,” in 1994. She currently serves as the book review editor of the Keats-Shelley Journal and president of the International Society for Travel Writing. She received a bachelor’s degree from Santa Clara University and a master’s and doctorate from the University of Washington.

The lecture is sponsored by Wake Forest’s English department and department of women’s and gender studies.