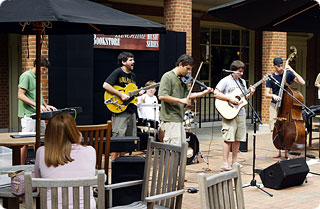 The band Carrotandstick plays in front of the bookstore.

Wake Forest University Stores has launched a new entertainment series called the “Bookstore Lunchtime Music Series” to be held every Thursday — weather permitting — from 11 a.m. to noon in front of the College Bookstore on University Plaza (Main Quad). The concerts are free and open to the public. Guests are encouraged to bring a blanket or chair and a bag lunch to enjoy the entertainment.

The series, which kicked off Sept. 2 with the band Carrotandstick, showcases local musical talent, including various community bands and Wake Forest University talent. Wake Forest senior and classical guitarist Christopher Seal will perform Sept. 9. Ensembles from the Winston-Salem Symphony are scheduled to play Sept. 23 and Oct. 14.

According to Buz Moser, director of University Stores, the concept was one of several initiatives Trip Chalk, Wake Forest’s Student Government president, and Moser discussed this summer. “The initiative has several purposes: first, to provide a free opportunity for Wake Forest students, faculty and staff and the community to come together in a fun, relaxed atmosphere; second, to thank the campus and community for visiting University Stores; and third, to provide a venue for local talent to promote their music,” said Moser.

The Winston-Salem Symphony ensembles, for example, have scheduled their lunchtime concert dates to coincide with the performances of the symphony’s September and October concerts. Tickets for those performances and compact discs of past performances will be available for purchase at the University Bookstore.

University Stores’ staff members are excited about the project and have high expectations for its success. “We placed an ad in the paper soliciting interested musicians, and we have gotten an onslaught of requests. People are interested and excited about being a part of this. It’s going to be so exciting to see who will end up being in our line-up,” said Val Kelly, visual display coordinator.

“I envision this series becoming a Thursday routine for many people and something that all of us at Wake Forest can be proud of,” said Moser.

For more information on upcoming performances or if musicians or groups are interested in participating, call Val Kelly at 336-758-4276.