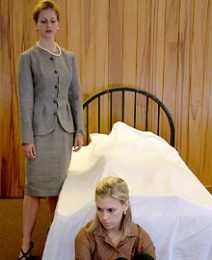 Wake Forest senior Stephanie Hill (standing) as Marion French and sophomore Dowd Keith as Isobel Glass. Marion and Isobel are sisters trying to figure out what to do after their father dies.

“The Secret Rapture,” the story of two ideologically opposed sisters — one a hard-nosed Thatcherite, the other a liberal — will open Wake Forest University Theatre’s 2004-2005 season Sept. 24-25 and Sept. 29-Oct. 2. Curtain time is 7:30 p.m. A matinee will be held at 2 p.m. Oct. 3. All performances will be held at the MainStage Theatre in Scales Fine Arts Center.

Directed by Brook Davis, Wake Forest assistant professor of theatre, “The Secret Rapture” is a 1988 British play written by David Hare that tells the story of two sisters who must deal not only with the family business and their father’s estate after he dies, but also with the decision whether or not to hire their young alcoholic stepmother. The drama addresses questions of integrity, family, the pursuit of wealth and the fragility of human relationships.

According to The Daily Mail, “The Secret Rapture” is considered one of Hare’s most impassioned and enthralling plays.

Tickets cost $12 for adults; $5 for students and may be purchased at the Theatre Box Office in the theatre lobby of Scales Fine Arts Center or by calling 336-758-5295 weekdays noon ­ 5 p.m.

Season tickets are also available and include performances of “The Secret Rapture,” “Catch-22,” “Antigone” and “Twelfth Night.” Prices are $36 for adults; $30 for senior citizens, Wake Forest faculty and staff; and $15 for students. Contact the Theatre Box Office to order.