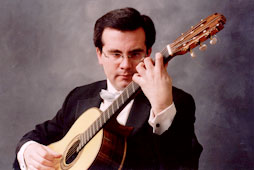 Carlos Pérez, internationally known guitar virtuoso, will perform a concert at Wake Forest University at 8 p.m. Oct. 22 in Brendle Recital Hall in Scales Fine Arts Center. The concert is free and open to the public.

Pérez was born in Chile in 1976. He graduated with honors from the Arts Faculty of the University of Chile. He is the recipient of numerous awards and has been a first prize winner in several International Guitar Competitions.

Pérez has recorded two compact discs and has played with orchestras in England, Belgium, Portugal, Russia and Chile. He made his debut with an American orchestra last May when he appeared with the Winston-Salem Symphony performing the Aranjuez concerto by Joaquín Rodrigo. He has also performed recitals in more than 20 countries, including the United States, France, Russia, Uruguay and New Zealand. Classical Guitar magazine has called Pérez “a master guitarist with true star quality.”

The concert is sponsored by the Center for International Studies and the music department. For more information, call 336-758-5364.