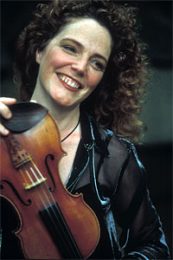 “A Scottish Christmas,” featuring Bonnie Rideout with Highland pipes and drums, Celtic harp and Scottish dancers, will make its first and only appearance in North Carolina at Wake Forest University at 7:30 p.m. Dec. 2 in Wait Chapel. The concert is the third of five concerts in the university’s 2004-2005 Secrest Artists Series.

The national touring show features Rideout, a three-time U.S.-Scottish fiddle champion, with some of North America and Scotland’s most legendary Celtic musicians.

Rideout, the only American to have represented Scottish fiddle music at the Edinburgh International Festival, is the first woman to hold the national Scottish fiddle title and the youngest to have won the U.S. championship. She has been named one of America’s most influential fiddlers of the 20th century by the Mel Bay Publishing Company. She is also consistently featured on National Public Radio’s program “The Thistle & Shamrock” and appears on “Morning Edition” and “Performance Today.”

Concert tickets are $22 for general admission; $16 for senior citizens and non-Wake Forest students; and $5 for children under 12. Tickets are available without charge to all Wake Forest students, faculty and staff. Tickets can be purchased weekdays, noon – 5 p.m. by visiting the Theatre Box Office in Scales Fine Arts Center or calling 336-758-5295.

NOTE TO THE EDITOR: Bonnie Rideout is available for phone interviews. To arrange an interview or concert coverage, contact Pam Barrett at 336-758-5237.