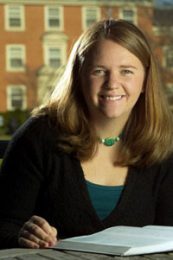 Cook, a biology major, was recognized for her research to improve health care for premature babies delivered at the Kenyan hospital where she was born.

Last November, Cook was among 32 Americans chosen by the Rhodes Trust to study at England’s Oxford University in 2005 as Rhodes Scholars. It was her Kenyan research and service that also contributed to her selection as a Rhodes Scholar.

USA Today’s program selects students from across the country for its first, second and third teams. Students also are named to an honorable mention list. Each team has 20 members.

The daughter of missionaries serving in Kenya, Cook has spent most of her life in Kijabe, Kenya, where she was born, reared and educated before coming to Wake Forest as a freshman in 2001. At Wake Forest, she is one of the university’s Carswell Scholars.

Her goal is to return to Africa as a primary care physician after completing medical school and training in the United States. She will begin medical school after earning a graduate degree as a Rhodes Scholar at Oxford.

In 2003, Cook returned to Kenya to conduct research and volunteer at Kijabe Hospital. Her mother is a teacher and her father is an administrator at Rift Valley Academy in Kijabe, an interdenominational boarding school for the children of missionaries serving in Africa.

In her work at Kijabe Hospital, Cook focused on the biomedical and social factors influencing the health of premature babies born there. Her research was prompted by her concerns about infant mortality in the region. During her research, she interviewed the families of premature babies born in the past couple of years and carefully reviewed the medical charts of the children looking for various trends associated with their health.

Cook also volunteered by assisting hospital medical staff with simple medical procedures, visiting with new mothers, and performing other functions at the hospital and in remote clinics. She also volunteered at New Life Homes in Nairobi, a facility that serves babies born HIV positive.

“I presented my findings to the pediatric staff and came up with a protocol for follow-up treatment of premature infants,” Cook said.