Two academic symposiums exploring the aims of a university education and the moral challenges of professional life will be among the events marking the Oct. 20 inauguration of Nathan O. Hatch as the 13th president of Wake Forest University. 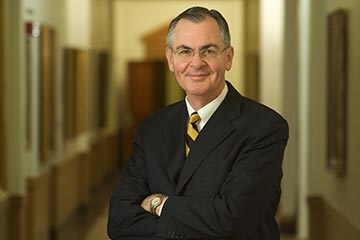 Hatch, formerly provost at the University of Notre Dame, assumed the Wake Forest presidency July 1. A native of Columbia, S.C., Hatch is one of the most influential scholars in the study of the history of religion in America. A Presbyterian, Hatch spent nearly his entire career as a history professor and administrator at Notre Dame, a Catholic university in South Bend, Ind.

The culmination of the week will be the ceremony in which Hatch is installed as president at 3 p.m. Oct. 20 in Wait Chapel. Organizers expect the chapel’s approximately 2,200 seats to be filled with invited guests, including representatives of other colleges and universities; government officials; members of the university’s board of trustees and volunteer boards; community leaders; Wake Forest faculty, students and administrative staff; and others.

The installation ceremony is not open to the public.

Immediately following the ceremony, a public reception will take place on Hearn Plaza (the Quad), outside the chapel.

The prayer service, which will be held in the sanctuary of the church at 8:15 a.m., is open to the public and will feature a keynote address by Wake Forest professor Maya Angelou. The service will include comments by Hatch and several city religious leaders.

Two public symposiums will be held in Brendle Recital Hall Oct. 19. The first is titled “Why the Liberal Arts? Exploring the Aims of a University Education.” It will be held from 10 a.m. to noon. The moderator will be historian Stanley N. Katz, professor at the Woodrow Wilson School of Public and International Affairs at Princeton University. Panelists include Andrew Delbanco, Julian Clarence Levi Professor in the Humanities at Columbia University; Ken Miller, professor of biology at Brown University; Harry Stout, Jonathan Edwards Professor of American Christianity at Yale University; and Jean Elshtain, Laura Spelman Rockefeller Professor of Social and Political Ethics at the University of Chicago.

The second symposium is titled “The Moral Challenges of Professional Life.” It will be held from 2 to 4 p.m. The moderator will be E.J. Dionne Jr., syndicated columnist at the Washington Post and senior fellow at the Brookings Institution. Panelists include Miroslav Volf, Henry B. Wright Professor of Systematic Theology at Yale Divinity School; Judge Ann C. Williams of the 7th U.S. Circuit Court of Appeals; James A. Autry, author and consultant; and Dr. Charles K. Francis, director of the Center on Health Disparities and Rudin Scholar in Urban Health at the New York Academy of Medicine.

An inaugural ball, planned by Wake Forest students, will be held at 9 p.m. Oct. 21 at Lawrence Joel Veterans Memorial Coliseum for faculty, staff, students, alumni and special guests. It is a ticketed event.

The ball is being held at the start of the university’s annual President’s Weekend. Another of the weekend’s highlights is the Oct. 22 football game between Wake Forest and North Carolina State.

At the time he was named Wake Forest president, Hatch was provost and Andrew V. Tackes Professor of History at Notre Dame. He had served as provost since 1996. He joined Notre Dame’s history faculty in 1975 and was appointed to the Tackes chair in 1999. Hatch won national acclaim for his 1989 book, “The Democratization of American Christianity.” He is also the author and editor of other books on religion, and he has written numerous articles on the subject.

Hatch received a Bachelor of Arts degree at Wheaton College in Illinois and Master of Arts and doctoral degrees at Washington University in St. Louis. He was also awarded post-doctoral research fellowships at Johns Hopkins University and Harvard University.

Additional inauguration information is available on the Web at http://www.wfu.edu/inauguration.