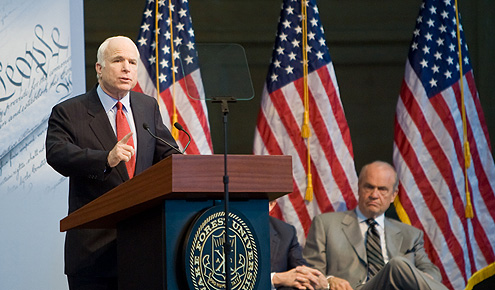 Sen. John McCain, presidential hopeful and presumptive Republican nominee, outlined his vision for the federal judiciary before a crowd of nearly 2,000 people May 6 at Wake Forest University’s Wait Chapel.

In his speech, McCain described a federal judiciary system out of balance with the other two branches of the government. If elected president, McCain said he will require demonstrated fidelity to the Constitution from his nominees, and will “look for accomplished men and women with a proven record of excellence in the law and a proven commitment to judicial restraint.”

He noted that judges today are ruling on matters that the writers of the Constitution never intended to be heard in the courts, criticizing what he called “the common and systematic abuse of our federal courts by the people we entrust with judicial power.”

McCain noted that hundreds of judges will be nominated to the bench during the next president’s term. When it comes to qualities sought in judicial candidates, he said there are definite differences between himself and the Democratic candidates.

“My two prospective opponents and I have very different ideas about the nature and exercise of judicial power,” McCain said. “We would nominate judges of a different kind, a different caliber, a different understanding of judicial power and its limits.” McCain said that Hillary Clinton and Barack Obama would allow activist, overreaching judges to make major social policy decisions instead of allowing Congress to decide according to the will of the people.

McCain said that he has his own standards of judicial ability, experience, philosophy and temperament, and that Chief Justice John Roberts and Justice Samuel Alito would serve as the model for his own nominees. He said he will look for nominees who will restore the standards and spirit that give the judicial branch its place of honor in the government.

“In federal and state courts and in the practice of law across our nation there are still men and women who understand very well the proper role of our judiciary, and I intend to find them and promote them if I am elected president of the United States,” he said.

McCain began his speech by reassuring Wake Forest students, who are currently in the midst of final exams. “All I can say is that a few bad grades don’t have to be the end of the road, so just give it your best and move on,” he said as the audience cheered. “I am living proof that an undistinguished academic record can be overcome in life.”

Wake Forest President Nathan O. Hatch extended an invitation in 2007 to all Democratic and Republican presidential candidates. On April 18, Sen. Hillary Clinton spoke in Wait Chapel as a result of that invitation. She was joined in that event by Maya Angelou, Reynolds Professor of American Studies at Wake Forest.

Statement from Wake Forest University: As an educational institution, Wake Forest is committed to promoting the free exchange of ideas, which includes providing a forum for speakers who express a wide variety of political views. The university’s tax-exempt status, however, requires that it not engage in any political campaign activity, which means the university is prohibited from endorsing or opposing any candidate for public office. Wake Forest takes its obligation in this regard very seriously. This event does not represent an endorsement by Wake Forest of any candidate for public office.