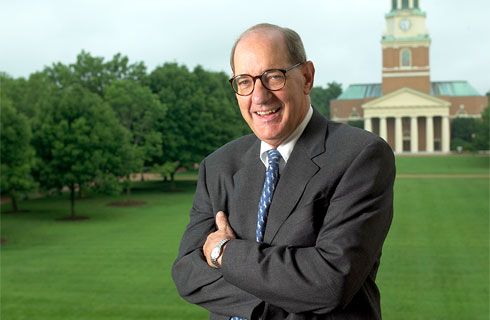 President Emeritus Hearn dies at 71
Thomas K. Hearn Jr., who led Wake Forest from being a well-regarded regional college to one of the top national universities in the country during his 22-year tenure as president, died on Aug. 18.

Memorials can be made to the Wake Forest University Brain Tumor Center of Excellence, Office of Development, Medical Center Boulevard, Winston-Salem, NC 27157-1021.

Guestbook
Alumni, friends and students are invited to share their thoughts and memories of President Emeritus Hearn.

Honoring a great leader
President Emeritus Thomas K. Hearn Jr. was remembered for being a compassionate man and a great leader during his memorial service on Aug. 22.

Obituary for Dr. Thomas K. Hearn Jr.
Published in the Aug. 20 edition of the Winston-Salem Journal.

The Hearn Presidency in photographs
A look back at the presidency of Thomas K. Hearn Jr.

Remembering a history-making presidency [PDF]
Dr. Hearn was fond of saying that Wake Forest was one of higher education’s most remarkable stories. The Wake Forest Magazine reviewed the latest chapter in that story — his chapter — when he retired in 2005.

Biography of Thomas K. Hearn Jr.
Dr. Hearn was senior vice president for non-medical affairs at the University of Alabama-Birmingham and just 45-years-old when he was named Wake Forest’s 12th president in 1983. His 22-year tenure matched that of William Louis Poteat (1905-27) as the longest-serving president in Wake Forest history.