Barack Obama: Yes, We Can Dream

We have heard it in the news. We have read it in magazines. And we all have, I am sure, thought it ourselves: the election of Barack Obama to the office of President of the United States represents a fundamental change in inter-race relations in the U.S. And on this day, as we remember the life and legacy of Dr. Martin Luther King Jr., we pause to ask ourselves, what does President Obama’s election mean? 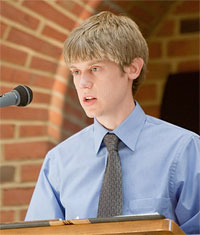 We are all familiar with the dream of Dr. King — a dream that was captured in history and in our memories and souls through his famous iteration “I have a dream” — and that dream has been so often echoed and so often repeated that any one of us could recite it and we would all remember those famous words — “I have a dream.”

But in the words of Dr. King, the “dream” is best phrased in the form of a question, and “the relevant question is … ‘How can we make freedom real and substantial for our colored citizens? What just course will ensure the greatest speed and completeness? And how do we combat opposition and overcome obstacles arising from the defaults of the past?’

Today this question might be phrased differently: “how do we provide true and accessible equality for the downtrodden and the oppressed? For the single mother who works two jobs to feed her children and makes less than her male counterparts in both occupations? For the high school student trying to gain entrance to college while attending a school that suffers from urban or rural poverty? For the person who feels discriminated against or limited by his or her race, physical ability, religion, or sexual orientation?”

These are all people for whom Dr. King’s dream has great resonance, and they are people for whom his passionate speech represents more than a yearly remembrance but stands as a promise and a hope that, to echo President Obama’s famous slogan, “yes we can.” But this is not just a question or a dream for those who find themselves trapped in what some today call “matrices of oppression.”

This question of how to find equality for all is also one for those who we might recognize as members of the dominant social order, and therein lies another dream of Dr. King’s — to bring together all of humanity — white and black, rich and poor, gay and straight, Western and non-Western — for the advancement of that very humanity.

And so, it is on this day that we ask ourselves, what does President Obama’s election mean in terms of Dr. King’s dream? Have we achieved something in electing Obama to the presidency, and have we successfully embarked on a new campaign of politics and activism in which race no longer means anything in terms of success or failure and in which all races and all creeds can unite in cooperation for a just cause?

A Change in Social Order

These are weighty questions and are ones for which Dr. King gave his life in pursuit of an answer. Certainly we can join in celebration of Obama’s accomplishment. 1600 Pennsylvania Avenue is a symbol of the American nation, and its new occupant stands as a testament to the world and to the American people that we as humans truly are capable of judging those based on the content of their character and not on the color of their skin.

In that sense, President Obama represents an outstanding new truth: old social orders can be overcome, at least when the candidate is strong enough. The power of such a symbol should not be overlooked. We hear stories everyday of implicit association tests and academic studies which record children of all races identifying whites with successful occupations and positive attributes and African Americans or other minorities with less savory characteristics.

With the election of President Obama, today’s children will grow up seeing a powerful man and a man worthy of respect and capable of leading the U.S. into a new global era — a man that happens to be African American and thus a symbol that race has no place in the judgment of a person’s ability in any context.

And we can also see in exit polls and in anecdotal accounts that in this year and in this election, a group of people so diverse that perhaps their only common characteristic was the label “American” united and finally did what Dr. King longed to see for so long: joined together irrespective of racial or other differences and achieved something momentous. Dr. King once admitted that one of his gravest disappointments was with the group he termed “the white moderate,” noting that “I have almost reached the regrettable conclusion that the Negro’s great stumbling block is not the White Citizens Counciler or the Ku Klux Klanner, but the white moderate who is more devoted to ‘order’ than to justice; who prefers a negative peace which is the absence of tension to a positive peace which is the presence of justice; who constantly says: ‘I agree with the goal you seek, but I cannot agree with your method… ‘”

Today, despite the fact that we heard similar comments made about Obama — comments such as “well, sure that all sounds good but he can’t do it” or statements which questioned Obama’s motives, sincerity or even his nationality — yes, even in spite of all that, the “white moderate” — as defined by Dr. King — joined with the rest of the American nation in electing someone that stood for justice and not for the established social hierarchy. For me and for my family in the context in which I was raised, the achievement of this dream has been a long time coming.

Still, though, Obama’s election presents new challenges. Just as many white Americans have been content to argue that the country’s racial tensions passed with Dr. King and the Civil Rights Movement, so too might many argue that Obama’s election verifies the assertion that Dr. King’s dream has been achieved and that such a dream no longer needs our attention.

Such an assumption, though, is specious. The statistics are verifiable and easily found which show that whites in the U.S. retain the possession of the upper hand in most any occupation in the country. The election of Obama, therefore, while certainly an accomplishment in many ways, must be recorded as a step and only a step.

As Dr. King reminds us, “The Negro today is not struggling for some abstract vague rights, but for concrete and prompt improvement in his way of life. What will it profit him to be able to send his children to an integrated school if the family income is insufficient to buy him school clothes?” Likewise, King might ask, what will it profit Americans today to see that an African American can be elected president if old socio-economic divides continue to widen as they are today?

What we must do, therefore, is remain circumspect. Obama’s election is certainly an inspiring sign of positive social change, and is one of which Dr. King would be particularly proud. We must never stop, though, seeking to realize King’s dream until we can say that true equality has been afforded to all.