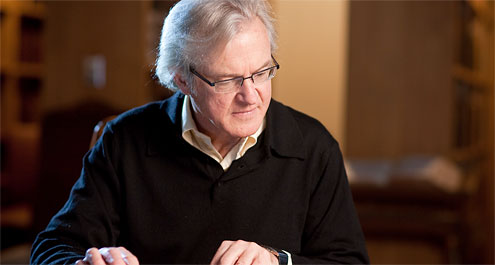 Noted Southern historian Paul Escott joined the faculty in 1988 as Reynolds Professor of History. He served as Dean of the College from 1995 until 2004. He is the author or editor of 13 books, including “North Carolinians in the Era of the Civil War and Reconstruction” (University of North Carolina Press, 2008) and his most recent book, “'What Shall We Do With the Negro?'.”

On the 200th anniversary of Abraham Lincoln’s birthday, a new book by Reynolds Professor Paul Escott offers some provocative arguments that challenge what we thought we knew about the 16th president. In “’What Shall We Do with the Negro?’: Lincoln, White Racism, and Civil War America” (University of Virginia Press), Escott argues that Lincoln was a complex politician of his time, with often conflicting attitudes and policies toward black Americans, rather than the enlightened Great Emancipator.

Where did the title come from?

It was taken from a headline that appeared in the New York Times in 1862. Once slavery became a target of the Northern war effort, the question arose in all sorts of publications. It was the major question that the war posed for North and South. The title is historically accurate, but it has raised hackles even though it’s a quotation from the time. One potential reviewer refused to read the book because he was offended that that question was used in the title.

What was the Times’ answer?

The Times was closely connected with the Lincoln administration, so the Times was more important than other newspapers. The Times said that freed slaves should stay in the South, so there would be little change in their status. On voting rights, the Times said it was as bizarre and ridiculous to let slaves vote as it would be to let women and cretins vote.

How would Lincoln have answered the question, what should we do with the slaves?

Earlier in the war, he supported colonization. At his first meeting with freed black leaders, he put heavy pressure on them to encourage immigration out of the United States, not only for slaves but for freed black people as well. He was considering places in Central America or the Caribbean. Although it is true that he stopped talking about colonization in January 1863, in the spring of 1863 he entered into a contract with promoters to send 400 black people to colonize an island near Haiti, an effort that failed.

One argument you make in the book is that we tend to simplify history.

Absolutely. Our popular culture oversimplifies and distorts the history of the Civil War and reconstruction. Lincoln especially has become an icon, used as a symbol of everything that is good and virtuous about the United States. One of the things that I argue is that this popular and long-standing distortion does a disservice to our country’s history and how historical progress takes place. He (Lincoln) was progressive in his day, but his policies show that he was more willing to be conciliatory to Southern whites to get them back into the union. That often came at the expense of African-Americans in the South.

And you take on some historians in the book as well?

The mistaken attitudes that I criticize are primarily a creation of our popular culture, rather than historians. But some of our best historians have committed themselves to an exaggerated version of Lincoln’s progressiveness. I really emphasized what Lincoln’s policies were, not what his thoughts might have been, or what his thoughts might have led him to do, but his actual policies up through the time of his death.

His policies were those of a practical politician who wanted to be successful in a racist country. Remember, he wasn’t terribly popular during his time in office. He was convinced that he would be defeated (for re-election in 1864). It was only the fall of Atlanta that changed things.

Have we idolized Lincoln as an 1860s Civil Rights’ leader?

Americans’ descriptions of Lincoln have changed over time. In earlier times, he was hailed as the savior of the Union. Later on as the Civil Rights movement became a force, attention gravitated toward this image as the Great Emancipator.

What is a more accurate portrayal of Lincoln?

A more accurate portrait shows a president who placed a higher priority on reunion than emancipation, who showed an enduring respect for states’ rights, who assumed that the social status of African Americans would change very slowly, and who offered major incentives to white Southerners at the expense of blacks.

He was progressive in his day, but not a 21st century egalitarian. One of the things I try to show by analyzing his policies is that he was more concerned about preserving the Union and being conciliatory toward Southern whites rather than making concessions toward black people.

Can you give some examples?

For example, he issued the Emancipation Proclamation as a war measure, but gave the South 100 days to return to the Union and keep their slaves. It didn’t affect any of the slaves in Union states, and also excluded Tennessee. One important thing to point out is that Lincoln consistently proposed, even after emancipation, that Southerners should adopt apprenticeships and “temporary arrangements” for slaves so that they would be nearly as well off as if the “present trouble” had not happened. He favored financial compensation to slaveholders for loss of their slaves. He also made it clear that he favored a speedy reentry of Southern states into the Union.

And although he urged Congress to propose the 13th Amendment, at the end of his life he was still in favor of letting the Southern states vote on it; it would be difficult to get three quarters of the states to ratify it if it was left up to the white governments of the South. It would have taken only 10 Southern states to defeat the amendment.

Was he conflicted about blacks throughout his life?

He felt that slavery was wrong and a blot on the national reputation, but he was an ambitious politician. He often admitted that public opinion would not support any radical change in the social status of black Americans. He himself supported discrimination against black people. At other times, he hoped the racial climate could improve. Just a few days before he died, he said he would favor letting a few black people vote, but emphasized that he wasn’t advocating it. He was still reaching out to Southern whites to get them to participate in an active way in the reunification of the country.