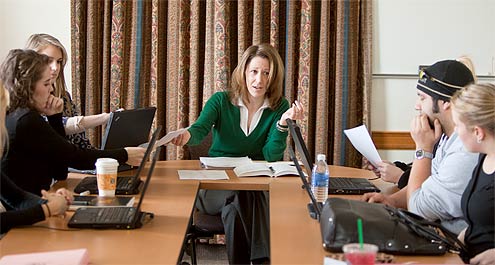 The controversial Web site “Juicy Campus,” which allowed college students to post anonymous, uncensored, often titillating gossip about classmates, shut down on Feb. 5 because of economic reasons. Wake Forest’s Juicy Ethics symposium on Feb. 23 will give students the opportunity to address Internet gossip sites, Internet ethics and online discourse. The symposium will feature presentations by four students followed by a panel discussion with faculty experts and an open discussion. Students will post updates during the symposium on a blog. Assistant Professor of Communication Alessandra Beasley Von Burg is the co-organizer of the symposium.

For those who may not be familiar with “Juicy Campus?, what was so bad about it?

The now-defunct Juicy Campus Web site encouraged students to gossip indiscriminately, anonymously and with no censorship. The site claimed to promote free speech and allowed students to post personal details about anybody’s habits, beliefs, sexuality, race, et cetera. Opponents of the site found it a source of ruthless and painful remarks with immense repercussions for the students named and none whatsoever for the authors of those comments. Some students probably found it liberating to say anything publicly, but the lack of control soon allowed harsh, and at times false, accusations to emerge online.

Where did the idea of the symposium come from?

The project emerged from my graduate seminar on Expressions of Justice and Democracy. Shelley Graves (’06) had the idea of responding to sites like Juicy Campus and coined the name of the symposium. She had heard several students complain about Juicy Campus because of detailed and offensive comments against, among others, women, gay, lesbians and people of color. So we worked together to organize and host a symposium to discuss issues of ethics and the Internet and provide a comfortable environment to address the implications of such ruthless practices.

What is the format of the symposium?

Because Juicy Campus targeted primarily undergraduate students, we invited undergraduates to express their views and encouraged their submissions for papers. We accepted four papers and these students are presenting their work as part of Juicy Ethics.

(Graduate students) Ashley Muddiman, Laura Ridley, Sean Luechtefeld and Taylor Hahn have met with the presenters to work on their oral skills and to help them strengthen their arguments so that they will be ready to discuss their papers and answer questions from the respondents and the audience.

What is the primary concern you hear most often from undergraduates about the Internet?

Fear. When I announced to my classes that Juicy Campus was shutting down, I heard a huge sigh of relief. That did not surprise me, but it saddened me to think that college students come to a great university to learn and grow and then they are forced to face their middle school fear of bullies — this time online bullies. What is frustrating is that they are doing it, not all of them, but some are causing this fear, this angst, this lack of trust and this continuous anxiety. People are hurting other people; students are inflicting pain on each other just because they don’t have to sign their name. This raises questions about what we can do to teach them to be thinking, caring and decent human beings, honest and accountable members of all the environments they inhabit, on or offline, so they don’t have to be afraid of each other.

Do anonymous online postings influence our behavior or opinions?

If your best friend is the subject of what you think is a false accusation, you may not believe it, but do you still wonder if there could be a trace of truth? If we read Consumers Reports about the safety of our car, we may not stop driving just because of a low ranking, but we may wonder and worry a bit more. What complicates this is that we may not know how to address it openly, especially when we find out the news through a gossip site or other form of anonymous online posting. Calling a car dealership and asking about a steering wheel is a lot easier than confronting our best friend’s sexuality.

What are you doing to help students become responsible users of the Internet?

My research is about citizenship and imagination, and I try to push students to imagine themselves as members of a community that is much larger than their university, city, state or nation. Citizenship is not just about where you are, but about what you do, the words and actions that connect you to others so you belong somewhere. The Internet may be a vast, borderless, boundless space, but if we remember we are the ones who populate those sites, we ought to reflect on our ethical responsibilities to treat others respectfully regardless of how close we are. I ask students to navigate the Internet as critical thinkers and acute readers who can discern valid arguments from irresponsible vents.

Why is it important that students attend events like this?

Because they are not alone out there, whether it is outside the Pit or on a gossip site. We are a community committed to learning, thinking, imagining and growing together, and this is the best place to ask questions, reflect on possibilities and realize what we can all do individually for each other. I want students to remember there is a person at both ends of those comments, both writing and reading them. Did they not come to Wake Forest to improve those skills?