Tracing the history of African-American faculty and students and the challenges they faced and overcame, Professor of History Anthony Parent delivered the address at Founders’ Day Convocation on Feb. 26. 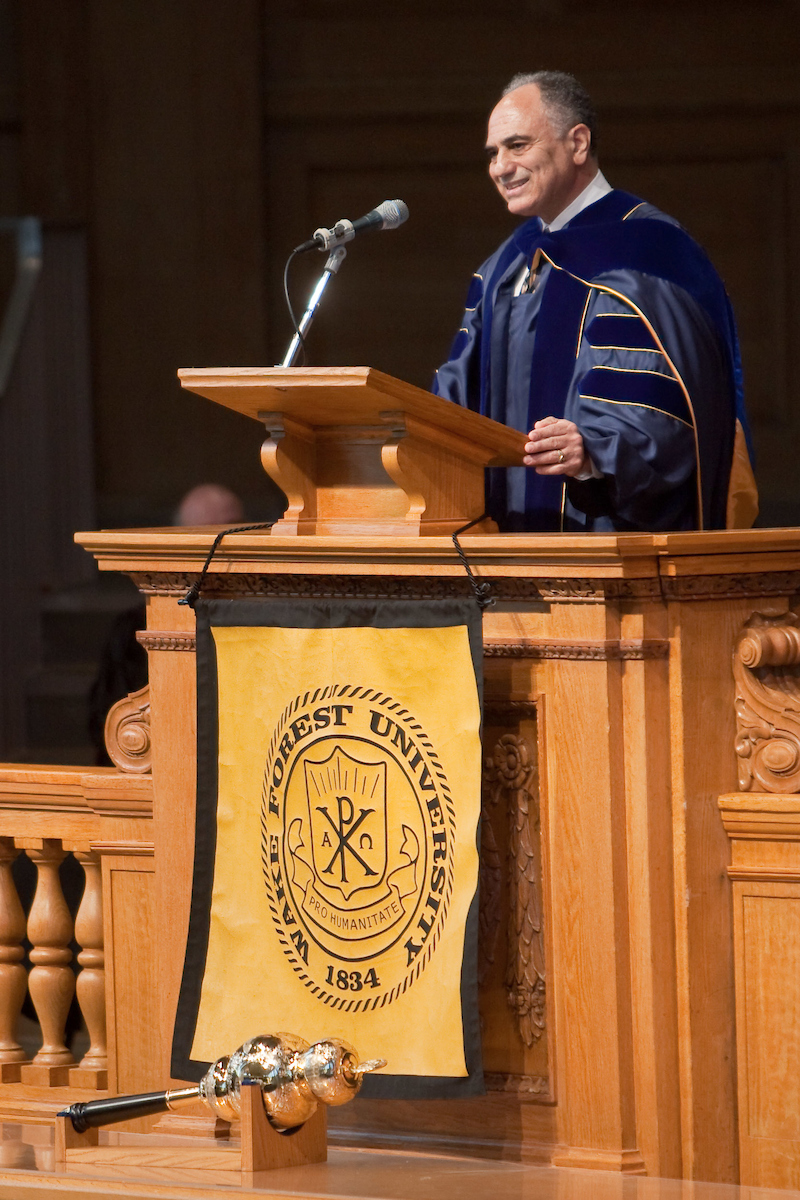 In his address, “Weathering Wake: The African-American Experience,” Parent noted the efforts of white students in the early 1960s to integrate the student body, which led to the enrollment of Ghana native Edward Reynolds in 1962. From there, he shared the personal stories of a number of African-Americans students.

It wasn’t until the 1970s that a more concerted effort was made to attract non-athlete African-Americans, he said. The first black faculty member wasn’t hired until 1969, and it would be another five years before the first black tenure-track professors, Herman Eure (Ph.D. ’74) and Dolly McPherson, were hired. The University reached a “milestone,” he said, in the hiring of Maya Angelou in 1982 as Reynolds Professor of American Studies. Parent joined the faculty in 1989; his son, Fred, is now a senior.

The small number of African-American students in the 1970s and 1980s formed a tight bond, he said, and they remembered the “safe havens” created by black faculty members, as well as black housekeepers and cafeteria workers. “This community atmosphere helped them succeed through a difficult, at times even hostile, experience,” he said. “They reckoned that successful African-American students were self-starters who weathered their experience.”

Parent recounted the painful memories of racism that some African-American alumni had shared with him, including the story of one professor in the 1960s who wouldn’t give a student an A because “a B was a good grade for a Negro.” He also recalled the controversy over the flying of a Confederate flag at a fraternity house on campus in the 1980s and the controversy that erupted in the 1990s when black Homecoming Kings and Queens were elected for twelve consecutive years.

Noting the successful careers that many African-American alumni have gone on to achieve in various fields, he ended with an Honor Roll listing of a “Baker’s Dozen” of them: from Skip Brown (’77, MBA ’86) in banking, to George Perkins (’85) with the MD Anderson Cancer Center, to Sylvia Rousseau (’68), former superintendent of the Los Angeles Unified School District.

“We are all enriched by the contributions of African-Americans to Wake Forest, and African-American students, alumni, faculty and staff are proud of their association with the University,” he said.