Let the games take over 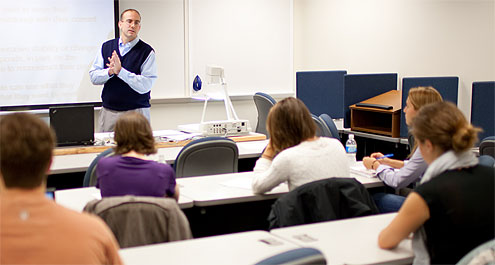 John Petrocelli, who joined the faculty in 2007 after earning his Ph.D. from Indiana University Bloomington, teaches his social psychology class.

Acording to a national survey from the Pew Internet & American Life Project, 97 percent of young people play video games, and two-thirds play games to socialize with family and friends. Assistant Professor of Psychology John Petrocelli explains how that influences the way they communicate.

What does the survey say about how young people interact with each other?

Younger people may prefer to communicate through various forms of digital communication compared to face-to-face communication. In some ways they may actually be communicating more than they normally would. Socializing in this way may have few conceptual differences from sitting around a table with friends and playing a game of Monopoly. However, if they rely on this or avoid face-to-face communication every time they need to discuss something sensitive, it’s probably not a good social crutch to form habits around.

Young people seem to have fewer concerns about privacy than their parents, don’t they?

Young people who socialize using things like video games may go well beyond the boundaries of traditional social norms and forget that many other people may be “listening” to their otherwise private conversations. Yet, it also seems possible that young Americans do not mind that other people are eavesdropping. Playing popular video games that permit multi-player communication can feel much like being a character in a movie; everyone is watching.

Such privacy-gone-public attitudes, and even behaviors like blogging, are consistent with what social psychologists call a large “spotlight effect.” People have a tendency to believe that the social spotlight shines more brightly on them than it actually does. So, if people seem to think that everyone is already watching them, blogging about one’s deepest thoughts and feelings or sharing a “private” conversation with the world via a video game isn’t much of a contrast from daily life.

How does this differ from their parents?

At first glance, the communication behaviors of the current generations look very different. However, my sense is that few things other than the game have actually changed. My parents played cards, bocce or horseshoes with their friends, and I spent hours with friends playing various sports, Monopoly and Tecmo Bowl. Teenagers today may socialize over a video game, but my guess is that the basic content isn’t very different. However, when you take a look at multi-player video games, like World of Warcraft or Second Life, you will see that almost anything can happen. These types of games may create a larger contrast with regard to more traditional forms of communicating.

Is it natural or is it a cultural phenomenon that 94 percent of girls said they played video games as a form of social interaction?

It doesn’t surprise me that girls may prefer to play video games for social reasons more than boys. The assumptions are that girls value relationships and togetherness more than boys, and video game creators are well aware of this. I see the phenomenon as a product of how girls and boys are socialized as well as a cultural force. It is easy to see how girls are socialized to value relationships, communication of feelings and togetherness, and how boys are socialized to value competition, by the types of toys we buy them and the expectations we have about their preferences. We seem to be more likely to buy our daughters a computer scrapbooking program and our sons the latest version of Madden NFL.

We clearly do not have enough research data to address these possibilities, so I’m completely speculating here. It seems equally likely that playing video games can have either a detrimental effect or an enhancing effect, and the result may depend on the extent to which they are played and the specific motivations underlying their use.

If young people use video games to initiate social activity, I think it can be quite functional. People who meet in the virtual world of a video game also have the potential to get to know each other without being biased by the perceptual lenses that are often shaped by superficial qualities or outward appearance. Social psychologist Mark Snyder demonstrated over 30 years ago that telephone conversations between male and female strangers sounded very different depending on how attractive the males were led to believe that their female counterparts actually were. On the other hand, if gamers hide behind the facade of video game avatars to avoid chronic social anxieties, it seems unlikely that “real” relationships will be enhanced.

However, we do know from research that exposure to violent video games can increase aggressive behavior in the short term and in the long term. This doesn’t seem to very promising for “enhancing relationships.”

Are young people who don’t really like playing video games doing it to take advantage of the social opportunity?

My guess is that the first thing they think about when they play a video game is racing something, shooting something, punching or kicking something, waging wars, or even building stuff, and not necessarily as a way to socialize with friends and family. However, I think that Web sites like Friendster, MySpace and Facebook have really opened the door to this idea. Playing video games is another place to find friends and meet new people with similar interests.

How might this affect their behavior in “the real world?”

Robert Putnam highlighted in his book “Bowling Alone” that Americans have become increasingly disconnected from one another as evidenced by decreasing sizes of volunteer groups, churches, PTAs, neighborhood functions and bowling alleys. I’ve always thought Putnam’s perspective was a bit too pessimistic, and I think it may be too early to determine the direct impact on our overall social behavior (good or bad) coming from socializing via video games.

Certainly, we know from countless studies that one’s mental state of focus can influence behavior by serving as a guide. Yet, it’s not easy to predict which particular video game behaviors are likely to impact “real world” behavior. Some may even argue that playing video games with others is social behavior, and earlier games like SimCity and strategy games like Age of Empires highlight very particular social behaviors and goals. Thus, one might argue that video games can enhance one’s social development.

However, one possibility seems to be that relying primarily on video games to socialize, stunts the development of the type of socializing we’re used to. In face-to-face communication there are norms that we learn and continually practice. In the world of a video game, the goals may be very similar to real life or very different (depending on the game). It would be a dangerous consequence if one’s goals and sense of achievement were fulfilled only by the simulated world. Conceptually, this wouldn’t be much different than the false sense of happiness that drug and alcohol abuse provide.