(Martha Mason (’60), who lived almost her entire life in an iron lung, died on May 4, 2009. She was 71. Her inspiring life story was the subject of a 2005 documentary by communication professor Mary Dalton (’83), who offers this tribute. She received Wake Forest’s Pro Humanitate Award in 2003.) 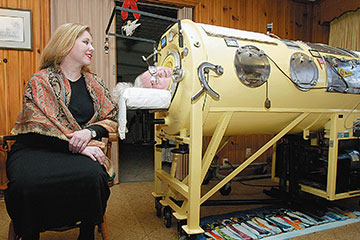 Much has been written about the hardship of Martha Mason’s life. The first thing you noticed when meeting Martha Mason was the bright yellow iron lung that encased her body and helped her breathe from 1948, when she contracted polio at age 11, until her death on May 4, 2009. She lived in this life-saving machine longer than anyone else in the world until today, and she lived most of those days in Lattimore, a small town located in southwestern North Carolina.

At first the image and sound of the iron lung were distracting if not shocking, but soon after talking with Martha, the massive, metal cylinder became inconsequential because it was so greatly exceeded by her spirit. She told me that she survived for so many years – while so many others with the same disease died – because of the exceptional care she received from her parents and community, and because she has always been driven to learn.

That intense desire to learn carried Martha first to Gardner-Webb College then to Wake Forest College where she graduated first in her class in 1960. Martha described herself as a “seeker” rather than an “intellectual,” but anyone who engaged her in conversation, one of her greatest pleasures, was quickly convinced that she was both.

Her personal story has long inspired her friends and neighbors, but Martha was a private person for most of her life. With the assistance of her voice-activated computer, she wrote her autobiography, “Breath: Life in the Rhythm of an Iron Lung.” In the years following its publication in 2003, Martha heard from people the world over who found something in her story that moved them, motivated them, or otherwise resonated with their personal experiences. We found the same types of responses to a documentary I made about her life in Lattimore a couple of years after the publication of her memoir.

As her friends know and readers of her book must at least suspect, Martha had an indelible sense of humor, she took great joy in talking about books and movies and politics, and her passion for all things Wake Forest was legendary. She especially loved Wake Forest athletics and was always keen to watch televised football and basketball games. Go Deacs!

She loved to host parties of all description, and my last meal with her on April 19 was a picnic lunch. We enjoyed the food, but mostly we enjoyed being together and appreciated the leafing trees and singing birds outside her windows.

Sometimes you meet someone and the “click” is instantaneous. It is one of the great blessings of my life that Martha and I clicked. For all of the visits and phone calls and e-mails that followed our first meeting, I am forever grateful, and for those I will miss from this day forward, I am deeply saddened.

Martha said many insightful things during the interviews we compiled for the documentary “Martha in Lattimore.” The film concludes with this quote: “Something happens to all of us. Mine is more visible than yours, but you have to deal with your things, too, and Joe Blow does. None of us are exempt from things that would make us extraordinary people if the world knew the story.”

I must take rare issue with this statement, though Martha, with her customary modesty, meant it. Some people are more extraordinary than others, and I cannot think of anyone more so than my dear friend Martha Mason.