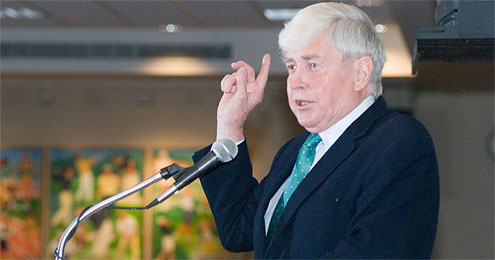 America lost a great man on May 2 with the passing of Jack French Kemp, Jr. And Wake Forest lost a good friend. Kemp may not have attended Wake Forest, but he was a part of our Deacon family. Most of the world knew Kemp as a Republican politician and champion of economic freedom, but Deacons also knew him as a Wake Forest parent and grandparent.

He spoke on campus many times over the years — as Opening Convocation Co-Speaker in ’86 (in which he received an Honorary Doctor of Laws Degree), our Commencement speaker in ’94, and most recently at the Volunteer Board gala last year. His son Jimmy (’93) played quarterback for the Deacons, and Kemp was frequently seen in the stands cheering on his son and the Old Gold and Black.

Jack Kemp was one of my political heroes, and for the last year, effectively my landlord as I sublet space in his office. I first met Kemp in ’92 when I was a senior at Wake. He had come down to watch the Deacons take on Clemson in what I recall was our first home win over the Tigers.

Some of my fraternity brothers and I met him in the parking lot after the game and had a chance to talk to him for a few minutes. In parting he gave our motley crew, still fired up by the big win, a cautionary wink and said, “you boys stay out of trouble tonight.” It was sound advice.

I never forgot that moment because I thought I had just met the man who was exactly what the Republican Party needed — which was a bit ironic given that his tireless, bordering on eternal optimism, though forward leaning, hearkened back to the then not so bygone days of Ronald Reagan.

Years later, I remember telling many of my law school classmates that I was willing to suspend school to volunteer for the campaign should Kemp run for president in ’96 because he was a once in a generation candidate: the right man at the right time with the right plan and message. When he didn’t run, I remember how I ripped the Kemp ’96 bumper sticker off my car in disappointment.

Jack Kemp was a self-described “bleeding heart conservative.” He inspired a generation with his enthusiastic advocacy of free-market principles, civil rights and tax reform. How many individuals could be rightly called a progressive and a conservative in the same sentence? The Wall Street Journal captured his true nature by eulogizing him as a “Capitalist for the Common Man.”

He could talk supply side economics and racial equality with the same passion. As he wrote in an open letter to his grandchildren in November 2008, “You see, real leadership is not just seeing the realities of what we are temporarily faced with, but seeing the possibilities and potential that can be realized by lifting up peoples’ visions of what they can be.”

Kemp co-authored, along with the late Senator William Roth, the tax cuts of President Reagan’s Economic Recovery Tax Act of 1981, which helped pull the country out of recession. As Secretary of HUD under President George H.W. Bush, Kemp was a vocal advocate for enterprise zones to stimulate development in our inner cities.

When I worked at HUD years later, his impact on the department was still evident, notably on the civil servants who had worked with him. I was struck by how many times I heard a career staffer say he was his or her favorite secretary, how approachable he had been, and — even the little things — like how he was the only HUD secretary ever to regularly eat lunch in the cafeteria with everyone else.

Kemp, who was the Republican Party’s Vice Presidential nominee in ’96, was also a successful businessman, nine-term congressman from New York, and celebrated quarterback and players’ union leader. But whether it was on the grid iron of professional football or in the arena of American politics, he was first and foremost always a fighter.

But his last fight was one he couldn’t win. No one could. Announcing in January that he had cancer, he approached this last great fight in much the same way as he approached his life: with grit, with humor and the heart and compassion that made him one of the most compelling figures in American politics for decades.

In his commencement address to Wake Forest graduates in ’94, Kemp said: “I want to urge you today to be leaders, not followers, in this era of opportunity … to be in the arena, not spectators in the stands. Our ideals endure because a few men and a few women in every generation believe them completely, and prove them with their lives. And so must you.”

Such is the embodiment of our Pro Humanitate mission spoken by a friend who embodied such an ideal.

Elliot S. Berke (’93) is an attorney in Washington, D.C., and a member of the Wake Forest Alumni Council.