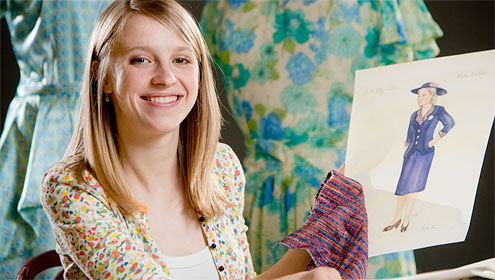 Senior Lauren Gaston is heading to Italy after graduation. Once there, she’ll join a traveling opera company, La Musica Lirica, to style wigs, run wardrobe and help with costume construction. From her “suitcase,” she’ll unpack her belongings – her considerable experience in costume design and a first-place award for her skills.

A Presidential Scholar in costume design, Gaston won top prize in a competition sponsored by the Southeastern Theatre Conference, one of the largest regional theatre organizations in the country. She was recognized for her work on the Wake Forest Theatre production of Arthur Miller’s “All My Sons,” which ran in the Mainstage Theatre last fall. It’s a distinctive honor that’s especially significant since Gaston is the first student to design costumes for a major Wake Forest Mainstage production.

“I wanted to be involved in all stages of the costume design process for ‘All My Sons,’ because of my love for design, art and collaboration,” says Gaston. “The theatre department’s dedicated faculty — along with my mentor, Lisa Weller, the costume shop manager – helped my idea become a reality.”

The project began with extensive research into the culture and dress of the play’s time period. Photography from Robert Frank’s 1955 “The Family of Man” exhibit inspired Gaston’s work, specifically his images of American flags as symbols of nationalism, but also imprisonment. “To me, Frank’s 1955 photograph, ‘Parade’, tells the story of ‘All My Sons’ — a conflict of duty between one’s home, or personal sphere, and one’s country. I incorporated vertical lines in some of the clothing to allude to this theme.”

Gaston and Weller also spent hours poring over 1940s department store catalogs. “When I wanted to know how a hem, collar or shoe buckle looked, Lisa and I would turn to Sears and Montgomery Ward. Then, we had to find ways to incorporate modern fabrics and decorative details into the piece.” Gaston says she often spent two to five hours a week shopping for fabrics and clothing, and another 10 to 12 hours overseeing costume construction and fittings.

With 10 actors, both students and local actors, to dress, the play presented some unique challenges. The University’s Costume Shop has clothing to fit college students, but clothes had to be sewn for the other actors. And experienced actors also have definite opinions about their costumes. “Adult actors can be skeptical of young designers, and I had to learn to stick to my intuition about a character, while still making the actors comfortable in their clothes,” she said.

Communication, not only with the actors, but with the director, lighting manager and set director, were crucial, she said. That was a lesson brought home when one costume was changed days before the play opened. “For one actor, I chose a purple silk dress. It wasn’t until the first dress rehearsal that I saw that purple dress turn fluorescent red under the stage lights. In one scene, the audience’s attention was suppose to be focused on a couple having an argument, but all eyes were on that red-dressed actor instead. I had to redo her costume in record time.”

During her four years at Wake Forest, Gaston worked in the costume shop piecing together garments for major theatre productions and dance concerts. She also helped dress student plays, including a one-act play she directed – a parody of Little Red Riding Hood.

After her summer work with La Musica Lirica, Gaston hopes to secure an apprenticeship in costume construction. “I’m a very detail-oriented person, and I enjoy bringing elements from a variety of subject areas to my designs. Learning more about sewing and the methods for making costumes would be a great way to continue to strengthen my design skills.”

Categories: Engaging in the Arts, Uncategorized