Faye Fulk, the associate director of career services in the School of Law, is retiring after 31 years of service at the law school and 27 years helping law students find jobs for the summer and after graduation.

How has law placement and law recruitment changed in your 27 years in career services? 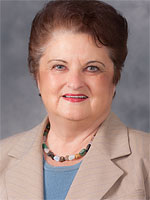 Computers and the technical side are what have changed the most. When I first started in career services, everything was typed on a manual typewriter and students filed their resumes in file folders. We had to package the resumes and send them out by snail mail to the law firms. Students had to come back into the office and sign up for their interviews. Then we had to type the schedules and post them on the bulletin board for students to come back and double-check what time their interview was to take place and where. I remember when we got our first computers. I was in Carswell Hall. We could type the schedules on the computers instead of the manual typewriter, but you still had to print and post it on the bulletin board for students to check. It was a lot more time-consuming in one way, but it was dependable, and sometimes faster, because you didn’t have to worry about the computers being down or something not working correctly.

I will say, when we collected resumes in the file folders and students had to come in our office, you got to know the students better because you had the opportunity to see them, talk and work with them direct. Now that they can apply for their interviews online, they don’t have to come into our office if they don’t want to. The only time they have to come in physically now is to get career counseling. Therefore, I don’t think you get to know the students as well anymore. I miss that part of counseling. Now I have to send e-mails and ask students to come in to see me. Some do and some don’t! Of course, we were cramped for space in Carswell Hall, but that made for knowing everyone quite well.

What about what they’re looking for after law school? Has that changed?

Has that made your job more difficult?

Since the late ’80s, we’ve had a fair number of out-of-state firms and employers that have recruited here. It does present its challenges, however, in that you have to recruit firms and employers from out-of-state. We’ve had faculty and deans who have always gone on recruiting trips to encourage out-of-state employers to come to Wake Forest. We’ve always had a lot of help getting our students employment out-of-state from our faculty and alums, too. We will find a student a mentor out-of-state, meaning a graduate who will work with a student that’s interested in going to New York or Kentucky, or wherever they want to go. Six months after the bar exam, our employment statistics have been consistently pretty high.

Are more students interested in transactional law than other types of law now?

I think there are more opportunities now. When Charlotte became the second-largest banking industry in the U.S., it created more opportunities. Charlotte became the Atlanta in North Carolina. All of our graduates used to want to go to Atlanta. Now, they want to go to Charlotte, or did, because of the banking industry. There are so many large New York transactional firms, and other large cities like Chicago, that have opened up offices in Charlotte. There have been lots of opportunities in Charlotte the past five or six years that were not there earlier in my career. It is not looking very good right now, but hopefully it will turn around again soon.

Do you think students, many of whom have large loans they have to repay, are chasing money more now?

Absolutely. They have to, because they have to pay back their loans. That’s unfortunate, but I don’t know the answer to that. I have a lot of students that come in during counseling and I suggest certain types of jobs, and their answer is, “I’d be interested in that, but I can’t do that, because I have $150,000 debt or $100,000 debt. I can’t pay my loans back with what that employer would pay.” I don’t have the answer to that.

So what were they gravitating toward then?

I think they were taking jobs they were really passionate about, more so than they are now. One thing is the large firms did not pay the large salaries they do now but they paid better than anything else. One of my favorite stories is Ben David (JD ’95), who is now the district attorney in Wilmington, N.C. He was a good student, and was passionate about being a District Attorney and going into public service. However, he had a big debt load and he knew he couldn’t go into public service at first, so he accepted a job with a large law firm in Winston-Salem. He worked with the large law firm, kept the same apartment he had lived in all through law school, saved every penny he made, and paid off his loans within about four or five years. He took a year off and traveled, and then he went to Wilmington and got a job as an assistant district attorney. Now he’s moved up and is the district attorney for New Hanover County. That is the story of how you don’t always get to do what you want to do initially, but if you have a plan, you will get there eventually.